If I have a case of writer's block, I pause to listen to an audiobook or some usic, or I draw. Sometimes if the writing is there but its stubborn or sluggish, I find myself retreating to my fortress of solitude (a.k.a. my master bedroom, where I cuddle with my cat, turn off the lights and lie on my stomach to clack away on my laptop). That helps me focus in a bit.

How would you pitch Bad Dreams to someone who has not heard of it before?

Can you tell us a little bit about the world that Bad Dreams is set in?

Bad Dreams is a short story within my Blood and Fire series (it is a stand-alone, however, so readers can read it with or without knowing any of the other books or characters).

The Blood and Fire world provides the setting for most—though not all—of my vampire, werewolf and demon stories, including Bad Dreams and my full-length novel, Lotus Petals. The defining characteristic of this world is the existence of The Blood Circle: a collection of five demon races, led by their respective Councilmen, in service to a king called the Drogh Lord. Demons in this world worship strength, and demons who are born into it—literally born, as in, from a demon womb—represent a lower caste shunned by others of their kind.

Do you have a favorite scene in Bad Dreams?

I've suffered "sleep paralysis", an occurrence described in this book, and tried to channel much of what I felt and learned about it into the story. My favorite part comes where Priya, the main character, gives in to the dream entirely, willingly embracing the experience.

It was a lot of fun to conceptualize and write about the unnamed stranger preying on Priya. The character does have a name and he appears in some of my other stories, but for Bad Dreams, he's exactly that: a bad dream. I enjoyed imagining how he would appear to his human prey, and how he would appeal to her deepest greeds.

As for the hardest...I think Priya's husband, who plays an exceptionally small role anyway, was most hard to connect with.

At the end of October I've got a book coming out which I am very excited to released! The book is His Cemetery Doll, taking place in post-World War II Europe, and following the story of a graveyard keeper haunted by an intruder to his cemetery: a life-like, beautiful living doll.

In addition to her novels, Brantwijn has had several stories published in anthologies by Breathless Press, including the 2013 Crimson Anthology and 2014 Ravaged Anthology. She's also had a short story published in the Cleiss Press Big Book of Orgasm and the anthology Coming Together Through The Storm. She hopes to have several more tales to tell as time goes on. She has author pages on GoodReads and Amazon, and loves to see reader comments on her work. Her short stories occasionally pop up at Foreplay and Fangs, her blog at http://brantwijn.blogspot.com.
__________________________________ 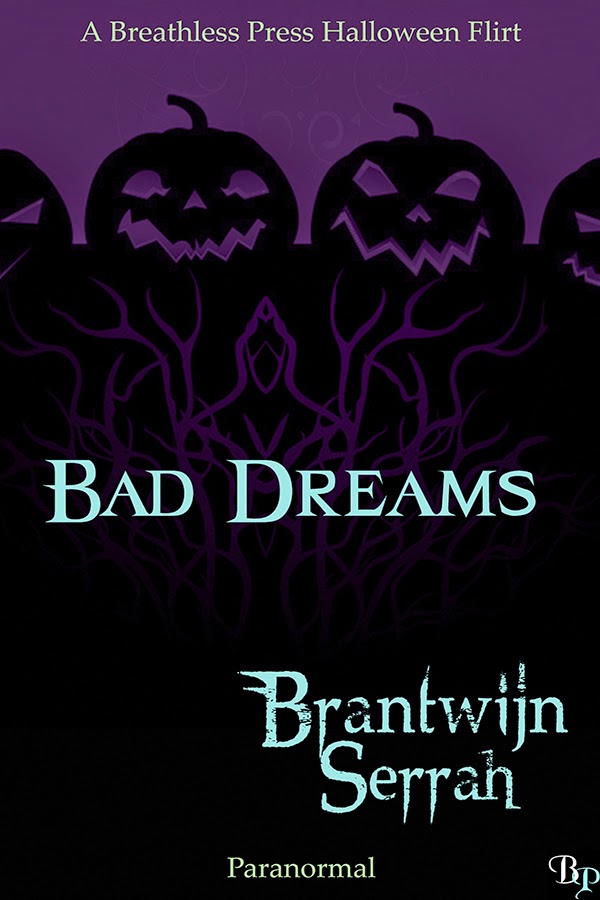 
Priya can't sleep, but that's not the worst of her troubles. She's starting to hallucinate, and every night she's seeing a very wicked male...

The doctor calls it "sleep paralysis." Her husband doesn't realize anything's wrong. But night after night, Priya finds herself stuck between sleep and waking, perfectly aware and perfectly helpless, as a looming dark creature hovers over her. He promises pleasure so sinful, Priya can't resist. Bound in his coils, she's starting to lose herself...

Dreary and exhausted, Priya couldn't find the energy to do anything besides plod off to bed. She crawled under the covers on her belly, praying there would be no delirious, dark imaginings when she closed her eyes.

Then—seemingly immediately—the paralysis took her. It replaced her weary, aching fatigue with a rabid, feverish, and animal need. Her body thrilled in madly constrained helplessness; she flushed hot under the weight of gleaming, glinting eyes.

She found it difficult to breathe. A heavy, winding coil, serpentine, wrapped around her throat, and more twisted around her wrists, pinning them behind her back. Priya wanted to scream, her higher brain waking into a red panic. Deeper inside, though, like a naughty child set loose to misbehave, the primal Priya, the visceral, hungry, and joyous Priya needed it, fighting to move if only so she could squirm happily against her restraints.

The fear and the pleasure were hard to separate. The world of the dream flooded her mind, dark and vague. Her thoughts and will were tugged down and down, while the shadows of her bedroom swam above her.

A body lay on top of hers, felt more than seen. Those silvery eyes locked with hers, like a hypnotist entrancing her as prey, a python with a bird. Her nakedness was all she could think about, vulnerable and open to the thing pinning her down. As the strange presence caressed her, she remembered...she'd wanted this. She'd asked Ron to blindfold and bind her, and now she was bound quite tightly, powerless as the demanding malevolence took everything he hungered for.
__________________________________