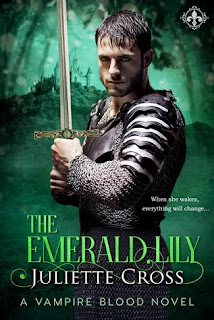 When Princess Vilhelmina Dragomir is awakened from her hellish sleep with a blood kiss from a handsome stranger, she learns that much has changed while she’s been away. The armies of the Black Lily and the vampire Crown have amassed and are on the brink of war.

No romantic entanglements, no family. Mikhail Romanov, Captain of the Bloodguard, took a vow when he joined the Bloodguard. But he never planned for the gut-punching attraction he would feel for the untouchable princess. He must keep his focus, though. In order to avenge his family, it’s essential he help Mina claim her crown and keep his damn hands off of her.

But Mina sets her heart on the elusive captain, and keeping his focus on the great battle ahead becomes harder and harder. While they're making plans, the evil King Dominik has been making some of his own. This time, he will show no mercy to the Princess…


THE EMERALD LILY was the last book? How did I not realize that going in? We have read Juliette's take on Cinderella, Little Red Riding Hood and Snow White, but are you ready for Sleeping Beauty?

We were introduced to Vilhelmina in The Black Lily and knew that she became a prisoner of Queen Morgrid after the fact. THE EMERALD LILY is the story of her release, love story and her part in the Black Lily.

Mina and Mikhail's sexual attraction was instant. Mikhail awoke Mina with a kiss, how could it not be? W find out a lot about both characters throughout the book and it really did read like they were meant to be together. I can't say I was surprised by Mina's forwardness towards Mikhail, but with all she has been through it made sense that she would go for what she wanted instead of sitting by and letting things pass her by.

It was great to see all the characters together in the final book. The final revelations and battle kinda took me by surprise. The ending circumstances were a nice twist.

Although I totally missed the fact that THE EMERALD LILY was the last of the Vampire Blood series, I was very happy with the way it wrapped everything up. Book one, THE BLACK LILY, was by far my favorite of the series, but THE EMERALD LILY came in second and made me happy that I stuck with the story and saw the series to the end.