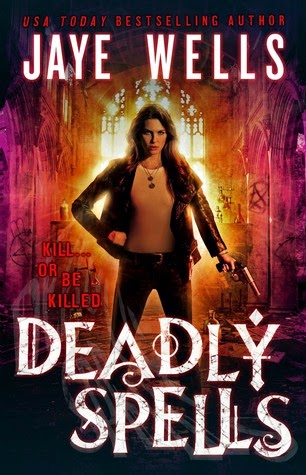 
After the grisly murder of a dirty magic coven leader, Kate Prospero and The Magical Enforcement Agency team up with the local police to find the killer. But as the infighting between covens turns ugly, an all-out war brews in the slums of Babylon.

When a tenacious reporter sticks her nose in both the investigation and Prospero's past in the covens, old ghosts resurface. The team will have to use all the weapons in their arsenal to stop the coven war and find the killer before the case brings down all their careers - and their lives.

Deadly Spells is the third novel in the Prospero's War series that started with Dirty Magic and Cursed Moon!


I didn't find DEADLY SPELLS to be as heavy feeling as CURSED MOON, but there was still plenty of action, suspense, drama and sneaky situations involved.

While Kate and Drew work to solve their latest crime we get to learn more about Gardner's past in book 3. We get to see a pretty different side to her and I loved how the team rallied into action when they needed to. John Volos is once again pretty involved in the storyline. I never really know his intentions, but Kate did a really good job keeping him at a distance. She has a few issues with keeping her feelings out of decisions, I don't think that can be helped when it comes to those two.

There is something I really need to get off my chest. Danny's attitude is killing me, I am so over him being a pain in the ass towards Kate. YES she can be a little overbearing/over protective, but he really needs an attitude adjustment. He is so lucky he isn't my kid (or the kid brother I raised).

On the romance side of things. I was NOT expecting what happened with Danny's teacher, I was HOPING something would happen with Drew, and I was GLAD nothing happened with John. That's all you're getting out of me.

As you have probably seen already, Jaye has said that this series is not meant to be a trilogy and there might or might not be more books. I would read more so I hope we get more. I have really enjoyed getting to know Kate and her 'gang' of colleague and friends, their stories are far from over.

Greta and the Glass Kingdom (Mylena Chronicles #2) by Chloe Jacobs