UFI welcomes Emma Jane Holloway Author of A Study In Silks. Thanks for Joining us!!

The Temptation of a Steampunk Heroine


Temptation wears many faces, and the Victorians were quick to point out (rather gleefully at times) all the ways a young girl could go wrong. Reputations could be ruined in an instant, based on little more than a careless word or a minute spent alone with a man in a closed room. Ruin could mean anything up to being cast out penniless on the streets.


In A Study in Silks, my steampunk heroine, Evelina Cooper, is all too aware of what a misstep might cost her. Her position in Society is by no means assured, and the fact that she knows how to work magic—a crime punishable by public execution, if she’s is lucky—means she’s extra paranoid. But temptation keeps leaving her calling cards like a persistent salesman.


First, because she is a pretty young woman of marriageable age, there are suitors. One is Tobias—handsome, clever, rich, and heir to a title. He’s the flashy sports car model—breathtaking, but not really practical. And then there is Nick, her childhood sweetheart and a performer with the circus where Evelina spent her childhood. He has all the street-smarts and passion a girl could want, but whenever her magic and meets his, the results are about as subtle as a poltergeist on amphetamines. That’s all too dangerous when one is trying to hide rogue talents from the authorities.


But where Evelina can (mostly) resist the lure of romance, she has her future to think of.  Security was a powerful motivator during a time when people literally starved in the streets. She may not be dazzled by money, but she’s been poor and knows all too well what hunger means. It was around this time that the Salvation Army was first established because the living conditions in some parts of London were so dire. Marxists, anarchists, and trade unions were active as well, each trying in their own way to alleviate the suffering. The streets of nineteenth-century London were a volatile place to be. They were, after all, the playground of Jack the Ripper.


But what she wants even more than pure safety is the kind of independence and intellectual freedom her uncle, Sherlock Holmes, enjoys—a faint hope for an unmarried woman of modest means. Lucky for her that this is a steampunk world, and she’s inherited dual talents for magic and science. And this is where Evelina does falter. When the sorcerer Magnus offers to teach her how to use her magic to full advantage, she wavers.


Unfortunately, Magnus is tainted by death magic and is exactly the type of practitioner she has been taught to revile. But he might hold the solution to all her troubles, if only she would consent to learn what he has to teach. The price wouldn’t be high—possibly just her soul. But in the end, what wouldn’t we pay for self-knowledge? For freedom and the chance to chart our own course in the world? The worst demons, the worst temptations, are always within ourselves. Over the three books of The Baskerville Affair, this is Evelina’s struggle.

What is the most interesting internal conflict you’ve read about?  Do you think this kind of inner struggle is a key feature of urban fantasy?

Ever since childhood, Emma Jane Holloway refused to accept that history was nothing but facts prisoned behind the closed door of time. Why waste a perfectly good playground coloring within the timelines? Accordingly, her novels are filled with whimsical impossibilities and the occasional eye-blinking impertinence—but always in the service of grand adventure.

Struggling between the practical and the artistic—a family tradition, along with ghosts and a belief in the curative powers of shortbread—Emma Jane has a degree in literature and job in finance. She lives in the Pacific Northwest in a house crammed with books, musical instruments, and half-finished sewing projects. In the meantime, she’s published articles, essays, short stories, and enough novels to build a fort for her stuffed hedgehog. 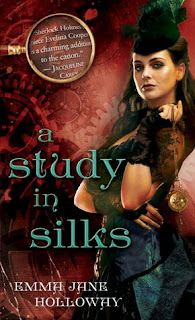 A Study In Silks
The Baskerville Affair #1


Evelina Cooper, the niece of the great Sherlock Holmes, is poised to enjoy her first Season in London’s high society. But there’s a murderer to deal with—not to mention missing automatons, a sorcerer, and a talking mouse.

In a Victorian era ruled by a council of ruthless steam barons, mechanical power is the real monarch, and sorcery the demon enemy of the empire. Nevertheless, the most coveted weapon is magic that can run machines—something Evelina has secretly mastered. But rather than making her fortune, her special talents could mean death or an eternity as a guest of Her Majesty’s secret laboratories. What’s a polite young lady to do but mind her manners and pray she’s never found out?

But then there’s that murder. As Sherlock’s niece, Evelina should be able to find the answers, but she has a lot to learn. And the first decision she has to make is whether to trust the handsome, clever rake who makes her breath come faster, or the dashing trick rider who would dare anything for her if she would only just ask.

Answer one of the questions above, and you’ll be entered into a draw for these earrings. They are adorably perfect for book lovers!  They’re hand made in Scotland and are tiny bound books with real pages. These are covered in a dark brown hand-made paper and ornamented with tiny silver keys. 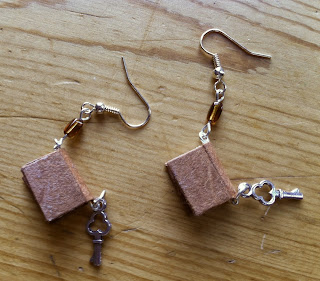