Review: Down the Shine by Kate Karyus Quinn 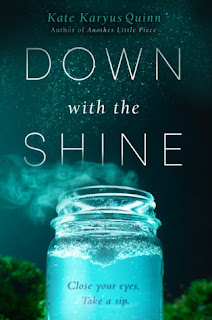 
There's a reason they say "be careful what you wish for." Just ask the girl who wished to be thinner and ended up smaller than Thumbelina, or the boy who asked for "balls of steel" and got them-literally. And never wish for your party to go on forever. Not unless you want your guests to be struck down by debilitating pain if they try to leave.


These are things Lennie only learns when it's too late-after she brings some of her uncles' moonshine to a party and toasts to dozens of wishes, including a big wish of her own: to bring back her best friend, Dylan, who was abducted and murdered six months ago.

Lennie didn't mean to cause so much chaos. She always thought her uncles' moonshine toast was just a tradition. And when they talked about carrying on their "important family legacy," she thought they meant good old-fashioned bootlegging.

As it turns out, they meant granting wishes. And Lennie has just granted more in one night than her uncles would grant in a year.

Now she has to find a way to undo the damage. But once granted, a wish can't be unmade...


I wasn't sure about DOWN THE SHINE when I decided to give it a try, but it ended up being a neat and unique story.

I really enjoyed the way that Lennie's magic worked. On top of her neat gift, Lennie was an interesting character and I found her pretty humorous. Lennie's Uncles really brought some more fun to the story. They are pretty crazy, but n a fun way. I enjoyed the overall storyline while Lennie learns how important it is to be careful what you wish for.

So why the 3 star rating? There was a LOT of weird going on. There is some cool mixed in, but there is just too many things that were way out there that made me roll my eyes or make a 'you've got to be kidding me' expression. There was some really odd dialogue is some situations that really didn't need to be in the story. The relationship between Lennie and Smith just didn't do anything for me. There was a lot of on again, off again and just not enough spark.

All in all though, it was a neat read and I'm glad I gave it a shot.