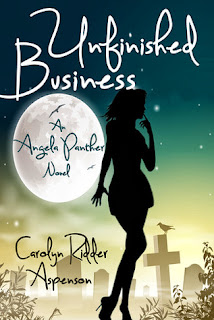 First in a series by Carolyn Ridder Aspenson. This book is a chick lit novel with a paranormal element.

When Angela's mother Fran dies and comes back as a ghost, Angela's ordinary life turns into a carnival show, starring both Angela and her nosy, dead mother.

It seems Fran's got some unfinished business on earth and she's determined to get it done, no matter what.

When Fran returned, she reignited her daughter's long suppressed psychic gift, one she neglected to mention to Angela, and now Angela sees ghosts everywhere. And they won't leave her alone.

Now Angela has to find a way to keep her old life in tact and help the dead with their unfinished business, all while trying to keep her dead mother out of trouble. And it's a lot for one woman to handle.


Carolyn wrote her first novel, Unfinished Business shortly after her mother died. She felt the need to let the world know a little about the woman who drove her absolutely crazy but loved her with an intensity unknown to normal people. While some of the book is loosely based on events surrounding her mother’s death, the author swears she’ll never tell if she really did bury her mother illegally.
An avid fitness buff, Carolyn writes a monthly health and fitness column for Northside Woman Magazine. She also writes several freelance articles monthly for various Atlanta area media outlets including the Forsyth Herald, the Milton Herald, The Revue and News, The Johns Creek Herald, Countyline Magazine and many Internet publications. She’s written notebooks full of great story ideas from the entertaining people she’s met as a journalist. If you know one of them, don’t mention her books to them, just in case.

Carolyn has written hundreds of guest blog posts ranging from humorous to serious about varying aspects of parenthood and marriage.  She considers herself an expert at not being an expert parent and works to spread her lack of expertise far and wide.

Dogs and recently cats too, are Carolyn’s preferred companions. She loves their loyalty, unconditional love and inability to talk in a language of which she understands.

A native of Indiana, Carolyn called the northwest Chicago suburbs home for over eighteen years but because she hates the way snow sounds when she walks on it, has spent the last sixteen living in the Atlanta suburbs with her husband, son, two dogs and a cat. Her two daughters live close by.

One day she plans to retire to a peaceful home with a fantastic view of something other than her neighbor’s house with a plethora of rescue animals by her side. Oh, and her husband too.

a Rafflecopter giveaway
Congrats!! I have emailed winner who has 48 hours to respond with mailing address or I will pick another.
Posted by StacyUFI at 2:30 AM No comments: