UFI welcomes Author Karen Hodges Miller. Thanks for Joining us!!


What can you tell my readers about yourself that they might not know from looking on your bio or reading in another interview?
I’ve lived in a lot of places, including Florida, Pennsylvania, Indiana, Puerto Rico and New Jersey. I like to say I’ve spent half my life in the tropics and the other half trying to get back there. I think my characters might have to vacation in Puerto Rico in one of my books. That would give me an excuse to travel back to one of my favorite places.
What do you enjoy doing on your down time?
I’m a homebody. I like to read, cook, swim, and spoil our two cats, Milo and Felix. I love to make jewelry, but I’ve been so busy writing lately, I haven’t had time.
What is your Favorite part of writing?
When it is done! Seriously, though I enjoy creating stories that people want to read. I want my readers to walk away feeling satisfied and to do that I try to create characters that people like and identify with and plots that have a bit of a twist. I like ending a chapter with something that makes you have to turn the page and keep reading.

Do you have any certain routines you must follow as you write?
Chocolate and Coca Cola. I have a firm believe that chocolate increases creativity. And Coca Cola, well, that’s my favorite form of caffeine.

What are some of your Favorite books or Authors in the Urban Fantasy/ Paranormal Genres?
There are so many. Laurel K. Hamilton, Karen Marie Moning—I LOVE the Fae Fever series, Christine Feehan, Melissa Macfie, KelleyArmstrong—I discovered her through the TV series Bitten, but of course the books have so much more detail.

How would you pitch The Patient Wolf  to someone who has not heard of it before?
The small town of Rivelou is hiding secrets, and they are about to claw their way to the surface.
Ana Dugan used to enjoy her nighttime walks through her quaint college town, but all of that changes when a handsome stranger rescues her from an attack. She’s not sure who she should be more afraid of the four legged beast who attacked her or the two legged one who saved her. She narrowly escapes, but soon learns that others weren’t so lucky. When another man enters her life claiming he’s there to protect her she’s not sure who she should trust, the wolf or the hunter.

Can you tell us a little bit about the world that The Patient Wolf is set in?
Rivelou, the town where my books take place, is a typical Midwestern small city…but when you scratch that ordinary surface something strange is going on. Many of the residents are leading a double life. Who is a werewolf? Who is a witch? Who knows the secrets that some very important people in town are keeping? In Rivelou, you never know just who…or what… you neighbor is.

Do you have a favorite scene in The Patient Wolf?
AS ANA APPROACHED the main entrance to the campus shortly after her class ended at nine o’clock that night, she began to feel a nervousness she had never before experienced on her walks home.
The entrance consisted of a large stone archway that covered the two-lane street. The school’s name, University of Rivelou, was painted in gothic letters across the top. Two smaller arches on either side of the auto entrance had paved cobblestone paths running through them for pedestrian use. The arches were covered with ancient Zephirine Droughin roses. The bushes climbed over both halves of the two smaller arches, and for most of the summer turned the two pedestrian entrances into miniature tunnels of the pink petals of the old fashioned Bourbon roses. Now, though a few late-blooming flowers still decorated the branches, the leaves had begun to drop off, and those that remained had turned a deep bronze, melding with the color of the old stone arches. Ana shivered. She wasn’t nervous, she told herself. It was just that the weather had turned colder this evening. She would not let yesterday’s attacks take away her enjoyment of her walk home.
On one side of the arches the campus was brightly lit, on the other side there were just a few streetlights, and very little traffic this time of night in the mostly residential section of town. The shadows seemed to close in around Ana as she approached the archway, and, for a few moments, she considered stepping off of the pedestrian path and crossing under the larger, brighter arch designed to accommodate cars. But she shook her head and chided herself.
“How silly of me. I’m more likely to get run over by some student speeding to get home after class than to meet the boogie man, or anything else, in the sidewalk tunnel.”
She took a deep breath and headed into the arch, then jumped and screamed as a tall shadow brandishing a sword loomed at the end of the passageway.

Which one character out of all your books was your favorite to write about? What about the hardest to write about?
That is such a hard question. I like them all, even the villains. Alexander Fontaine may be my favorite character to write about. He is sexy, mysterious, and has just a touch of a French accent. Which was fun to throw in.
Ana, the heroine, was the most difficult because I wanted her to be vulnerable, yet spunky.


What Other Projects can we look forward to reading from you?
The second book in my series is titled The Artificial Witch. It features one of the minor characters in The Patient Wolf, Shannon Kelly. She’s a cop and a young widow. I liked her so much I decided she deserved her own story. I’ve completed the first chapter, and I hope to have it finished before the end of the year.
__________________________________

Karen Hodges Miller’s fascination with werewolves, vampires, witches, ghosts, and all things supernatural began with the childhood classics. She gobbled up everything from The Haunting of Hill House to the Narnia series, from Dracula to Rebecca. As a writer, however, she stuck to non-fiction; working as a newspaper and magazine reporter and editor and in 2004 opening her own publishing company.

She has written several books for authors on the subject of writing and publishing. The Patient Wolf is her first fiction novel and of course, it features a very sexy werewolf. 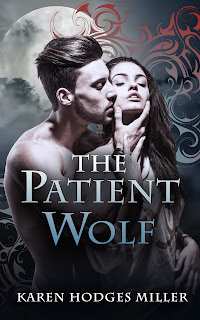 The small town of Rivelou is hiding secrets, and they are about to claw their way to the surface.

Ana Dugan used to enjoy her nighttime walks through her quaint college town, but all of that changes when a handsome stranger rescues her from an attack. She’s not sure who she should be more afraid of the four legged beast who attacked her or the two legged one who saved her. She narrowly escapes, but soon learns that others weren’t so lucky.

When another man enters her life claiming he’s there to protect her she’s not sure who she should trust, the wolf or the hunter.

He guided Chris into a small, warm living room and back to a kitchen where Sophie was animatedly, if with little accuracy, describing the incident to Joe’s wife and daughter.