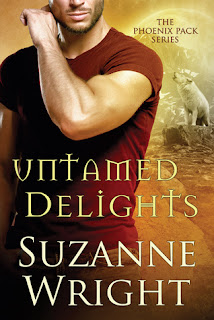 Return to the sensual and feral stirrings of the Phoenix Pack as a woman who’s already bound to one man is tempted by a wolf who’s bound only to his nightly desires.

Cat shifter Mila Devereaux can’t help but see it as a betrayal. That her one true mate imprinted himself on another female was hard enough to accept. Struggling to be at peace with her loveless fate, she doesn’t fight the suggestion of entering an arranged mating. Then she meets Dominic, a pack enforcer with a notorious reputation. It’s in his very scent. This irresistible playboy—and delicious badass wolf—is making Mila’s fantasies come alive again.

Alarming, compelling, and heady with sensual energy, Dominic is an expert at making women shed their inhibitions. Now everything about him—his killer smile, his perfectly sculpted body, and his smooth-as-honey voice—is drawing in a captivating new catch. But for the first time in his life, Dominic is feeling more than a fling. He finds himself tantalized by a female who makes him think of forever. He wants all of Mila and won’t be satisfied until he has it.

As the passion grows wild, so does the risk. They’re falling in love in the shadows and secrets of their pasts. And it’s threatening to destroy everything Mila and Dominic are fighting for. And are destined for.


I'm slightly devastated that UNTAMED DELIGHTS is the last book of the The Phoenix Pack series.

Each of the Phoenix pack books has had plenty of danger and action and UNTAMED DELIGHTS is no different.  There are actually a few different mysteries and dangerous situations coming from different directions in the story which made it that much better.

The romance between Dominic and Mila was one of those slow build situations and I enjoyed their give and take with each other. I really enjoyed the way that Wright built their relationship around them not being each others fated mate after so many fated mate pairs. I also enjoyed that Mila didn't pine after her fated mate after he unknowingly rejected her. She really stood up for herself and it made me like her and her strength even more.

I really enjoyed witnessing Dominic's HEA. Both him and Mila really deserved each other and the life that they ended up in.  Again, I hate that this is the end. I love all the characters and I love seeing them and how their life is going along in every book. I did really enjoy the end jump ahead though and appreciated seeing how everyone turned out. This was a great series that I thoroughly enjoyed following.