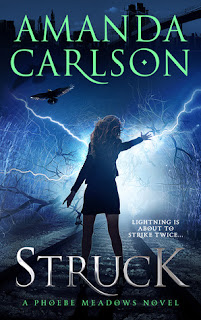 
I really hate that I didn't love STRUCK. It had such a great idea going in, but there were some pretty big issues that kept me from falling in love with the storyline and characters.

I liked the characters enough that I wanted them to make it to the end of STRUCK. Phoebe, although kinda foolish, had an interesting background to learn. I probably would have loved her if she wasn't so ridiculously unwilling to see and believe what was right in front of her face. Because she was so adamant that everything was some huge mistake or joke she got in more trouble and did the stupidest things that I'm surprised she made it past the first couple of chapters. I liked Fenrir and don't really have any big complaints about his character. He seemed to make good decisions and did a good job of protecting Phoebe. There were a few other side characters that seemed to have decent heads on their shoulders as well. The relationship between Phoebe and Fen had it's moments, but I didn't feel there was enough development involved. It was more of an insta-love situation and I thought they needed to grow a bit more than they did for the amount of feelings they were feeling.

A lot of the dialogue just about killed me. Not only is most everything way over explained, but it felt fake and somewhat forced a lot of the time. The whole book wasn't like that, but enough of it was that it totally ruined the flow for me.

The action is one thing that STRUCK didn't lack. There is danger and fights around every corner of the book which left the characters with very little down time. There were a lot of different nookes and crannies in the world that Carlson created in STRUCK and they were all very well built. I had no problem imagining I was there.

The biggest bummer I had with STRUCK is that I didn't feel the need to read book two when it was over. That is something that I look for in every book I read and if you don't feel that urge it's hard to want to put the next book on your wishlist. Unless I see some reason that will make me think that book two will fix some of my biggest issues —I really do hope I do see something because this series has great potential—, I don't think I will be reading it.