UFI welcomes Tiffany Allee Author of Succubus Lost. Thanks for Joining us!!

I'll admit it. I'm a sucker for anything paranormal. A touch of fantasy or supernatural in a story and it's likely to hook me. Heck, I even love a good superhero story. Most of the time in this type of novel or movie, the main characters (some of them, at least) possess magic, or are mythical creatures of some sort who come with their own gifts. Vampires, werewolves, demons—they all have a little extra oomph added to make them just a little bit cooler.

The amount of power varies. The type of abilities differs as well. And I wonder, is it the power these creatures possess that makes them so attractive to us—both as main male and female characters? Or do we only need that slight difference—that touch of specialness—with a heaping of interesting characterization?

Something I've noticed about the characters I enjoy is that while most of them are a bit different—few Average Joes—they don't spend a lot of time flaunting their powers. Their abilities are part of them, but I think that the stories tend to focus more on the humanity behind the otherness. The person behind the powers.

And nine times out of ten, it's not the characters' special powers that save the day; it's their humanity and willingness to put themselves on the line. 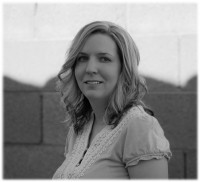 Tiffany currently lives in Phoenix, AZ, by way of Chicago and Denver, and is happily married to a secret romantic. She spends her days working in Corporate America while daydreaming about sexy heroes, ass-kicking heroines, and interesting ways to kill people (for her books, of course). Her nights are reserved for writing and bothering her husband and cats (according to them). Her passions include reading, chocolate, travel, wine, and family.
__________________________________ 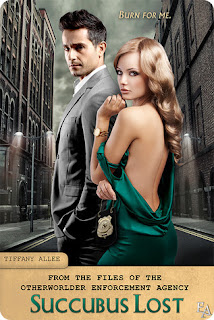 Succubus Lost
From the Files of the Otherworlder Enforcement Agency #2
May 24, 2012


Someone is kidnapping and incinerating otherworlders beyond recognition, and detective Marisol Whitman, a succubus, races to find the murderer before he claims another victim. But her pursuit is derailed when her responsible younger sister vanishes. Marisol suspects foul play and enlists support from an unlikely source: an agent from the Otherworlder Enforcement Agency, Valerio Costa.

When the trail pointing to everyone from vampires to witches dries up, Agent Costa admits to knowing more than he’s shared. Marisol’s sister’s kidnapper harnesses more magic than she can imagine—and they’re running out of time. To find her sister before her powers are drained and twisted beyond recognition, Marisol must connect the dots between cases and put her trust in Costa, a salamander who may burn her before she can solve either case. 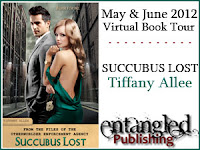