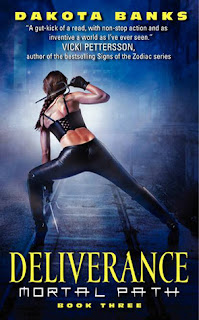 
A demon's assassin for centuries, Maliha Crayne has gone rogue, determined to save a life for every one she's destroyed in order to free herself from an eternity of enslavement, damnation, and excruciating torment. But as the powers that sustained her in the past fade, she is wary of trusting those closest to her-especially her lover, Jake. Should Maliha listen to her heart or the alarms going off in her head? Then her closest friends begin to disappear, one by one. Amid her anger, suspicion, and sorrow, she feels her life spiraling out of control.

Worse still, a beautiful, Renaissance murderess is recruiting Maliha as her new assassin. Maliha is turning into a lethal puppet with an evil Immortal pulling the strings, forced to kill innocents or see her missing friends die horribly. Suddenly trapped in a moral no-man's land, Maliha is damned if she does and damned if she doesn't…and time is rapidly running out.

DELIVERANCE is book 3 in the Mortal Path Series. As with the previous books there is plenty of Action, drama and suspense in Maliha's life as she continues to fight for redemption. One of her closest most loyal friends is kidnapped and Maliha is working against time to please the kidnappers and find him before he is lost forever.

Maliha has a real hard time in DELIVERANCE. She is over thinking everything and double guessing herself, what she wants out of life and her friendships. She doesn't want her friends hurt so she starts pushing them away and trying to deal with everything on her own. Lucky for her her friends aren't about to go anywhere and are as loyal as they come. I honestly always liked Jake so seeing him show his true colors was shocking, I never saw the events with him coming. Wow what a scumbag.

Dakota's books are filled with unique adventures that leave your mind turning. With every book comes more understanding of Maliha's situation and what she might deal with in the future. One thing I would really love is for a drawing of Maliha's scales in the beginning and the end of each book to reflect what they look like before and after the books adventures. Dakota does a great job of describing them but I think a visualization would be awesome. *wink wink* I would recommend starting from book 1 DARK TIMES if your new to the series.