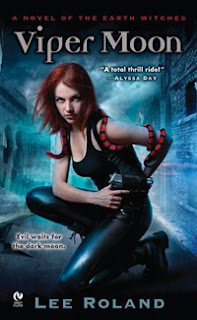 
Cassandra Archer is the Huntress. She has faithfully served the Earth Mother for years, rescuing kidnapped children from monsters-both human and supernatural-dwelling in the ruins of the Barrows District. But when two children are kidnapped under similar circumstances, all clues point to a cataclysmic event on the next dark moon. Now Cass must race against the clock and prevent a sacrifice that could destroy the entire town..

I feel like I'm constantly saying this but the cover is awesome and was what originally drew my eye to the book (shocking right? lol) The opening scene of VIPER MOON really did a fantastic job of grabbing me and keeping me anchored to the story.  The book started with action and ended with action.

I enjoyed following Cassandra, she was easy to get to know and like. Phelan shows up at her door looking for her help in finding his missing 13 year old sister. Her starts out not really liking her but attracted to her all the same. They really work well together. There is also Micheal who is the owner of a club in the Barrows. He really likes Cassandra and she is attracted to him but she doesn't trust herself with him, nor does she trust him so she refuses to even consider him. It definitely makes for some awkward moments for the three when they are together. The world building was great, I liked all the different places that were described and imagining the Barrows was super easy. The book was fast paced.  I enjoyed the fact that Cassandra was the Earth mothers Huntress, it was unique and well written.  My biggest disappointment about the book is realizing at the end that the next book isn't going to be about Cassandra. I got to know her and got attached to her character and the excerpt for the next book doesn't look like it features her. Hey, maybe I'm wrong I do hope that I am. All in all I was very much entertained and enjoyed VIPER MOON.

The winners chosen by Rafflecopter are…
Read more »
Posted by StacyUFI at 2:59 AM No comments: