UFI welcomes Author Tara West. Thanks for Joining us!!


Ash MacLeod has to be good if she wants to trade up her dump in purgatory for a high rise in heaven. If only she wasn’t tempted by a sexy grim reaper in tight denim…
Greetings from the thirteenth level of purgatory. Thanks to Urban Fantasy Investigations for hosting me. I’m Ash MacLeod, the Supernatural Intervention Agency’s newest badass ghoster. Tara West is busy promoting the fifth Eternally Yours novel, Dead and Delicious, featuring yours truly, so I told her I’d welcome you all to her very twisted and unconventional series about heaven, hell, and all the levels in-between.
You’re probably wondering how I ended up dead. Let’s just say I had a little accident with a faulty blow-dryer while getting ready for a blind date. I was in for quite a shock (pun intended) when I woke up and discovered the panty-melting stud at my door wasn’t my date, but Aedan O’Connor, the grim reaper sent to collect my soul. The misunderstanding could’ve happened to anyone, so it wasn’t my fault we engaged in a little kissing and groping while hovering over my dead body. I won’t bore you with all the details. Again, totally not my fault.
After Aedan dropped me off at The Penthouse, aka Heaven, I spent one glorious night feasting on cheesecake while my personal sexy valet catered to my every whim. Yes, my every whim. Then I woke up to discover there’d been a mistake, and I was supposed to be on the bottom level of purgatory. Luckily, Aedan pulled some strings and got me on purgatory’s top floor, the least crappy level—did I mention my ancient refrigerator, shag carpet, and slowww Internet? By the way, here’s an afterlife tip: When a guy with a bloody hammer lodged in his head takes you on a date, don’t order your steak rare.
Purgatory isn’t all that bad. My childhood best buddy, my black Lab Jack, somehow found his way back to me. Also, things between Aedan and me are getting pretty hot and heavy. Who would’ve thought I’d have to die to discover sex was better than chocolate? Plus, I’ve got this cool new ghosting job, thanks to my ability to project my aura thirteen levels away. The job comes with a few occupational hazards, namely demons want to burn my eyes out, but every career has its downsides.
Anyway, Tara is really excited about her newest book release. It’s only 2.99 for a limited time. Price goes up to 3.99 after today. If you haven’t read the series yet, you don’t need to start with book one, but I promise lots of panty melting moments if you do. Tara has generously offered to give her readers Divine and Dateless, Eternally Yours Book One, as a free download. Get ready to squee your pants with laughter. Thanks for stopping by, and remember, good girls go to heaven, but bad girls go all the way. 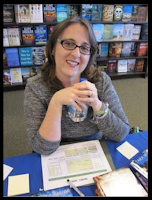 Tara West's young adult and new adult romances have been Kindle bestsellers. A former high school English teacher, Tara is now a full-time writer and graphic artist. She enjoys spending time with her family, interacting with her fans, and fishing the Texas coast. 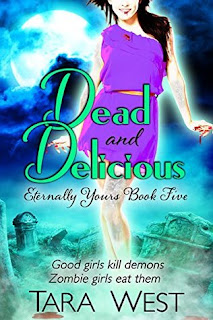 Two zombies and one skeleton on a road trip to Vegas to kill a witch, stop an apocalypse, and rescue their friends from the belly of a shadow dragon.

Nothing weird about that.

Five things I learned while being a fallen angel zombie:
1. Duct tape works better than embalming.
2. Alopecia is not my favorite hairstyle.
3. Fried demons smell like bacon.
4. This brain breath is affecting my love life.
5. Nothing ruins a honeymoon like an apocalypse.

Our elevator had dropped us off smack in the middle of what could have only been described as an undead battlefield. We were in an old cemetery shrouded in a thin mist and faintly illuminated by moonlight. Gravesites had been unearthed and tombstones turned to rubble while grims and ghosters decapitated demonic creatures that came at them from all sides. And was it just me, or was it uncommonly hot for early spring in Seattle?
Margo Styles, a ghoster on the elite Alpha Squad, who looked like a Barbie and screamed like a banshee, shoved a big-ass machete into my arms. “Arm yourself.” She drew in a deep breath before driving a hatchet into some pale creature’s skull.
My stomach roiled when his brain exploded in a fountain of green ooze, splattering Margo’s face. I wasn’t crazy about Margo, and I’d wanted to dump a plate of caviar over her snooty head a time or two, but I wouldn’t wish a mouthful of demon sludge on my worst enemy.
Aedan pushed me behind him, slicing off a demon’s head before I had a chance to blink. The rest of the ghosters on my squad somehow found weapons and were joining in the action. I spun in a slow circle, nearly dropping the heavy machete on my foot. I could barely lift it. How the hell was I supposed to cut off heads with it? All while wearing a wedding gown and heels.
I ducked under Aedan’s arm as he decapitated a demon with spikes coming out of his skull. “Margo, what is happening?” I hollered, unable to keep the shrill rattle out of my voice.
“I don’t know,” she said between grunts, driving her blade into a scaly creature’s torso, “but all hell’s broke loose.”
A tall shadow fell over us, and I peered up at the commander of the ghosting squadrons. Shadow, a formidable ghoster, was made even creepier by me knowing he’d once been controlled by a powerful demon.
“Shadow,” I cried. “Please tell me what’s happening.”
“Delta squad.” He frowned at me, waving to Sarge and Aedan. “You take the west end. Whatever you do, do not let them leave the cemetery.” He handed Sarge and Aedan walkie-talkies.
So like a man to talk over the woman, but now wasn’t the time to get into a sexism debate. I reminded myself Shadow had died 150 years ago, back when women were still swooning from tight corsets and battery-operated dildos hadn’t been invented yet, so we kind of had to take shit from men.
I shrieked when a demon head catapulted past me, spewing blood all over my wedding gown. Dammit! Now I was pissed! I dropped the machete and yanked a blade out of a demon’s back, shook off the blood, and marched alongside my husband. So much for my white wedding. Guess that was my karma for trying to pass as a virgin. 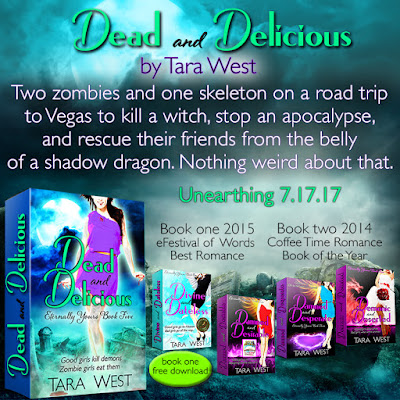