UFI welcomes Author Nikki Z. Richard. Thanks for Joining us!!

I have a ragdoll kitty named Audrey Hepburn. It’s the perfect name for her. She’s prim and prissy but has a heart of gold.

I love music! I’m a musician, and I play bass and sing in a pizza-punk band, Infinite Pizza. A lot of free time goes to that. And binge-watching anime series on my iphone.

My favorite part of writing is the excitement and relief I feel when I’ve completed any 1st draft. I’m a huge nerd, and editing/revising is super enjoyable to me. The actual writing-down-the-words process is always so much work for me. My mind is constantly going, and I’m like a child when it comes to sitting down and writing

Most definitely. I can never write inside my house. There are far too many distractions and I’m not disciplined enough to focus in the vicinity of a television. I either find a place to write outside or hole up inside a coffee shop. I also have to be listening to music. I honestly don’t know how to write without a soundtrack.

Octavia Butler is by far my favorite author. She’s the first African-American woman to come to international fame as a science-fiction writer. In Dawn, the first book in her Xenogenesis trilogy, Butler explores such progressive queer themes. In Parable of the Sower, Butler imagines a dystopic future not-too-far from where we are in America now, and preaches the inevitability of change. She even wrote a vampire novel, Fledging, which should tickle the heart of any gothic literature lover.

How would you pitch Demon in the Whitelands to someone who has not heard of it before?

At its core, Demon in the Whitelands is about sixteen-year-old Samuel trying to reconcile his father’s religious piety with the ugliness and disparity he sees in the world. When he ends up becoming the caretaker of a “demon girl” by the mayor of Haid, he finds himself in a dangerous game of power, violence, and control. If you’re into YA dystopian literature with sensitive characters, queer themes, and a bit of gore, Demon in the Whitelands might be right for you.

Can you tell us a little bit about the world that Demon in the Whitelands is set in?

Demon in the Whitelands is set in a dystopic future where exceptional sciences have been banned and all religions have been consolidated into one, the Holy Roots. The story takes place in Haid, a lumber town in the heart of the Whitelands, where it’s notorious for it’s cold climate and snows nearly 10 months out of the year.

Do you have a favorite scene in Demon in the Whitelands?

Early on in the novel, there is a scene where Samuel catches and kills a deer caught in a     ground snare. Feeling sympathy for the animal, he thinks about Zei, and what it means to be held captive. He also contemplates his own weakness, and wonders if he will ever measure up to his father’s standards. It’s a quiet scene, but (to me) it’s probably one of the most authentic scenes in the novel.

My favorite (and most difficult) character to write about is Zei. They are a genderless humanoid being with uncanny strength, predator-like eyes, a missing arm, and mysterious scars covering their body. Zei is so interesting, particularly because they don’t have a voice: the ability to speak. That fact also makes it so hard to write about Zei. How do I read intention, feeling, and thought into a character who literally has no voice? I’m hoping to do far more exploring of Zei’s origins in the sequel.

My biggest upcoming project is a new-adult queer dystopian novel that’s sort of     a hybrid between Octavia Butler’s Parable of the Sower and Naomi Alderman’s The Power. I’m also working on the sequel to Demon in the Whitelands!

Nikki Richard is a sensitive queer writer with moods and coping mechanisms. An MFA graduate from the University of Baltimore, she lives in the city with her hot wife, amazing daughter, and fluffy cat. 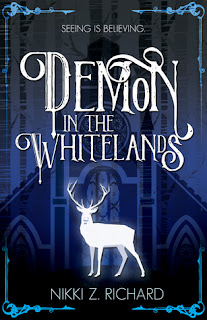 Demon in the Whitelands
Amazon


Sixteen-year-old Samuel, son of devout cleric, has endured shame and prejudice his entire life. Although he is destined to become clergy too, he longs for an ordinary life in the whitelands away from demons and holy roots.
When the mayor claims to have captured a mute demon girl, Samuel is forced to become her caretaker. But as Samuel gets to know the prisoner, he finds her not to be very demonlike. Instead, she is intelligent, meek, and an exceptional artist. Despite her seeming goodness, some more concerning things cannot be explained. Samuel is hard-pressed to reconcile her uncanny strength and speed, missing arm, ambiguous gender, and the mysterious scars covering most of her body.

Samuel forms a deep attachment to the girl with predator eyes and violent outbursts, against his father’s advice. Their friendship could turn into something more. But when Samuel discovers the mayor’s dark intentions, he must decide whether to risk his own execution by setting her free or watch as the girl is used as a pawn in a dangerous game of oppression, fear, and murder.


After a while, the buck quieted its struggle. It panted wildly, its dark tongue hanging out the crack of its mouth. Samuel got to his knees, drawing closer. The deer twisted its neck in horror, its dark eyes watching him. They were wide and black. The eyes of prey.
Samuel reached inside his jacket and got the knife.
“It’s okay,” he said softly as he straddled the deer’s torso, making sure to fully secure him underneath his legs. The buck’s muscles twitched, but the creature could do nothing. How had the girl felt when she’d been caught in the bear trap, iron teeth snapping into her leg? Like the buck? Did she think she’d be free? Somehow, he couldn’t picture her as a deer. She was more like a scrappy wolf cub.
Or a demon. 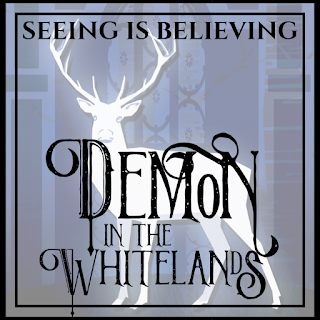