My favorite quote from Her Black Soul and what it means to me
“Hating Dahlia for sending her back to Netherworld was a place inside Evita's mind she refused to visit. Giving in to that kind of darkness led nowhere good. She prayed for the strength to endure the other realm for another two hundred years, or however long she would be there this time.”

I love the heroine in this story and enjoy writing strong heroines. Evita was captured by the Demon Ruler and remained in his realm for two centuries where she endured considerable pain and suffering but despite this she didn’t let Netherworld (Hell) break her. This quote is from a place in the book where she’s facing defeat. However, even though she has every reason to loathe the antagonist, Dahlia, she refuses to let hate consume her. For me this is about the negativity we all sometimes have to face in our lives.  Negativity can take many forms such as receiving a less than stellar review of your books or a co-worker who gives you a hard time. The list is endless, but you get the point.  Evita has a choice, she can either give into the negative consequences she’s facing or rise above it and make the best of her situation. She doesn’t want to go back to Netherworld and I won’t give away the ending but she’d rather endure Netherworld than become someone like Dahlia, hateful, vengeful, and full of negativity.
__________________________________

A.J. Norris is a romantic suspense and dark paranormal romance author. She enjoys being able to get inside someone else's head, even a fictional one, and see what they see. Watching how her characters deal with difficult situations or squirm with the uncomfortable ones makes the hard work of writing all worth it. However, writing and reading weren’t always in her foremost thoughts. In fact, her love affair with writing came as a shock to everyone she knows, including herself. At a young age, she rarely opened a book, unless forced to read something for school. But that’s all behind her now. She wrote her first book several years ago, which turned out to be a surprisingly cathartic process, and she hasn’t been able to stop writing since.

A.J. loves going to the movies, watching her son play baseball, and communing with other writers. She’s a member of two writer’s groups and RWA. She lives in southeastern Michigan with her family, who are extremely tolerant (at least most of the time) of all her late nights behind the computer.
Along with contributing to Magical Pages Book Blog & Reviews, she’s currently working on book two of her Tattoo Crimes Series.

Her romantic suspense novel, Tattoo Killer (Book 1 of the Tattoo Crimes series), was published by Limitless, LLC in October 2016. Her Black Wings, book one of The Dark Amulet Series, a paranormal romance, released in July 2016 and book two, Her Black Heart released August 23, 2016. The third book in her Dark Amulet series, Her Black Soul, comes out April 11, 2017. 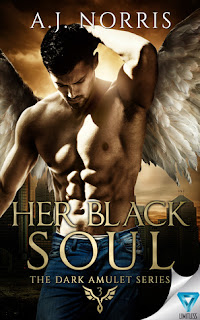 Her Black Soul
The Dark Amulet #3


Netherworld…
Humans call it Hell. She calls it home…

Evita the Warrior has no memory of the life she led as an angel before her fall. The only place she knows is the fiery world full of goat-demons and animal-headed beasts. Despite many opportunities to flee, she chooses to remain.

Accepting that Evita will never return to him, Virgil eases his loneliness in the arms of different females, refusing to get attached, though his selfish ways leave a trail of heartbroken and angry lovers in his wake. During a night of drinking, Virgil hooks up with a demon in disguise and is captured by the Demon Ruler, Abaddon, and taken to Netherworld.

Trapped in Netherworld, Virgil faces an eternity of unendurable torment…

But it’s there Virgil finds his lost love. Overcome by joy at the reunion, he convinces her to leave Netherworld…only to discover the true reason Abaddon lured him to his realm.

Abaddon knows Evita hid an amulet on Earth before she fell—and he wants it back. To thwart him, Evita must recapture her memories of her life before her fall, and remember where she hid the amulet.

Can she unlock her past and beat the enemy to the prize in time to save the Earthly Realm from falling prey to Abaddon’s deadly plans?


Evie was more beautiful than he remembered. They sat crouched together on the ground. A smudge of dirt was streaked across her jawline and chin. Light from a torch far above their heads shone down. Her eyelashes cast shadows on her high cheekbones. Her black horns hadn’t diminished her looks. Partly because he loved her and nothing could interfere with that, and also he knew they were actually once golden wings. Even in the dimly lit cavern, he saw her blush. She was a fierce Warrior class angel in combat, but somewhat demure. His mate concealed the protrusions with her hands.
He tried his best to smile. “Do not worry about those.”
“Ohhhh,” the Damned soul garbled. Virgil helped Evie up and shielded her with his big body. The soul inched his way toward the cavern’s entrance on his stomach with his head facing up, leaving a bloody trail in his wake.
“Let’s get out of here,” Virgil said, taking her hand. The cool metal cuff reminded him they wouldn’t be getting far. Pools of molten rock lay on either side of the path leading to the Void cavern. Leaving her side, he searched around for something to chip the stone wall surrounding the anchors to free her chains.
On the far wall, near the people chained for punishment, Virgil spotted a pointed iron rod. Trying to break Aba’s chains was useless, but the walls weren’t under the Ruler’s control. Virgil focused on the metal staff as he approached. The chained Damned didn’t look as disgusting at a distance, although up close…oh Deus. Intestines spilled out onto the floor, eyeballs hung from sockets, and one was missing its lower jaw. Strike that. Not missing. On the ground in a pool of bodily fluids...
Virgil covered his mouth until he realized his own hand was coated in feces and coughed in disgust. “Yuk.” He dreamed of a hot shower. Many hot showers. He grabbed the rod and ran back to Evie and started chipping away at the wall.
“What are you doing?” she questioned.
“Getting us…out…of here,” he said between jabs. Stone chunks flew.
“But I don’t want to go anywhere.”
His heart constricted and died a little bit, except he didn’t stop chipping away. He switched to the other side of the anchor. Pebbles and dust landed on the ground.
“Stop…please,” she begged.
“No. You’re coming with me.”
“But I told you I don’t want to.”
The last bit of wall gave way and the anchor clanked to the ground. They stared at each other for a moment. “You wanted me to tell you how I knew your name, did you not?”
“Yeah, but—”
“That is the deal.”
Evie narrowed her eyes. “That wasn’t our deal.”
He splayed his hands and shrugged. “It is now.”
“You can’t change the rules.”
“Are you going to come willingly or do I have to carry you out of here? Your choice, but I’m warning you, I’m not leaving without you.”