Promo: You Had Me at Jaguar by Terry Spear (@TerrySpear, @SourcebooksCasa) 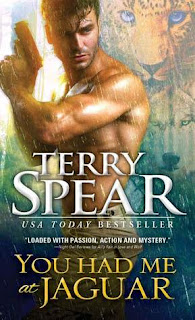 You Had Me at Jaguar
Heart of the Shifter #1
Amazon


They're not the only ones on the prowl...but they're the most dangerous...

The United Shifter Force gives jaguar agent Howard Armstrong an impossible task—to protect fierce she-jaguar Valerie Chambers, when the last thing she wants is protecting. They're going international to take down a killer and he can guard Valerie all day long. But guard his heart? He doesn't stand a chance.