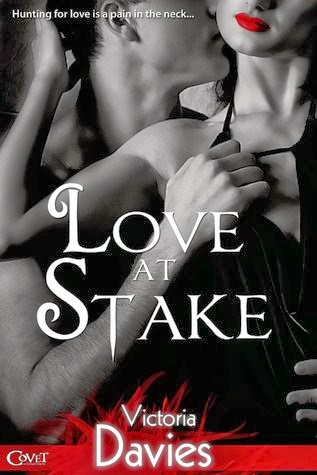 Abbey is the lone human working for Fated Match, a company that pairs members of the supernatural community with their eternal mates.

To snag a young vampire socialite as their next client, Abbey journeys to the home of Lucian Redgrave, the oldest vampire on the East Coast. But he's not willing to allow his vampire daughter to use the agency... unless Abbey can first find his perfect match in a month.

As Abbey coaches Lucian through his dates, she can’t deny the chemistry between them. But humans are toys for vampires, and risking her heart isn't a part of the plan.

LOVE AT STAKE's blurb didn't really excite me but I talked myself into it because I usually love Entangled titles and it ended up being a nice, emotionally charged love story with plenty of drama, spicy scenes and interesting characters.

When Abby's boss sends her to land a new client she ends up signing the sexy vampire Lucian instead. Lucian makes it clear that she is the only one he is willing to work with and from the beginning their 'working' relationship brings frustration to not only them but Abby's boss who makes it known that Abby isn't good enough for him.

I really enjoyed Abby's character. She ended up being a pretty strong woman even when she was down. She was drawn to Lucian but she believes in her companies matching program and it says they are not even close to a match. He makes his intentions towards her pretty clear but she thinks he is just trying to throw her off her game because he doesn't want his daughter using Fated Match. Lucian took a bit for me to like. He seemed over the top, arrogant and just all around full of himself. As the story goes on you get a better feel for who he really is and by the end I was a little in love with him. The relationship goes from work to personal pretty fast but it wasn't too fast to seem unbelievable. Feelings are held back on both sides and it takes both a while to get their heads out of their butts.

I admit I am an emotional reader and I was in tears a few times during LOVE AT STAKE. Both characters are pretty emotional throughout and the author did a great job making you feel what they felt. I really liked Lucian's daughter Melissa and would love a story that involves her. I would definitely read more.

* This book was provided free of charge from the publisher in exchange for an honest review.
Posted by StacyUFI at 7:03 PM No comments: