UFI welcomes Author Cynthea Masson. Thanks for Joining us!!


My writing desk is surrounded by paraphernalia from the Whedon Studies world—that is, from the community of scholars whose research and writing focus on the works of television creator Joss Whedon. One of these items is a Mr. Pointy Award (named for Buffy’s favourite stake), which was given to me by the Whedon Studies Association for “Best Essay in Whedon Studies for 2013.” For those interested in reading about puppets and Whedon’s Angel, here is the essay citation: “‘Break Out the Champagne, Pinocchio’: Angel and the Puppet Paradox.” Studies in Popular Culture 35.2 (2013): 43-67.


What do you enjoy doing on your down time?
As an English professor with full-time teaching and research responsibilities, writing The Alchemists’ Council IS what I do during my “downtime” between semesters. Nonetheless, as pleasurable as writing can be, it still involves a lot of work. So during complete downtime, I enjoy playing games (especially those focused around Firefly), watching television (especially Game of Thrones and The Night Manager), walking along the seawall, and sharing margaritas and laughter with my friends.


What is your Favorite part of writing?
My favourite part of writing is the experience of synchronicity—when something I have written into one of my fictional dimensions ends up corresponding uncannily with something in the real world. For example, in The Alchemists’ Council, tears are associated with amber; I had no idea when I wrote of the amber/tear connection that it had already been made in classical mythology. Similarly, just yesterday I wrote about a sacred ritual in Book Two that features juniper incense. Upon looking up juniper incense afterward, I learned that it is indeed one of the most ancient and sacred forms of incense. These moments bring magic to the writing process.


Do you have any certain routines you must follow as you write?
Yes. Years ago I decided that, like the alchemists in the book, I should wear a pendant when working on a manuscript. Therefore, the first thing I do when I sit down to write is to remove my writing pendant from its silk pouch and hang it around my neck by its silver cord. I then spend a minute or so, pendant in hand, shifting my attention to the world of the book before I begin. You can find a short video featuring this pendant here: https://www.goodreads.com/videos/93988-pendant-video-june-2015. 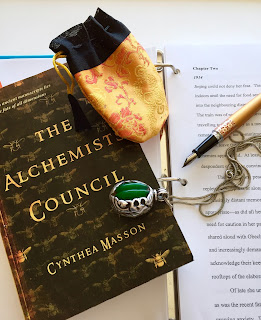 What are some of your Favorite books or Authors in the Urban Fantasy/ Paranormal Genres?
Though I enjoy reading fantasy novels when possible, my interest in urban fantasy comes from television rather than books. In particular, as you might suspect from my response to your first question, my favourite urban fantasy series of all time are Buffy the Vampire Slayer and Angel. Thus, I would name Joss Whedon and the writers who have worked with him over the years (such as Jane Espenson, Drew Goddard, Marti Noxon, Tim Minear, Steven S. DeKnight, Rebecca Rand Kirshner, Ben Edlund, and David Fury) as my favourite urban fantasy authors.


How would you pitch The Alchemists’ Council to someone who has not heard of it before?
As a new Initiate with the Alchemists’ Council, Jaden is trained to maintain the elemental balance of the world, while fending off interference by the malevolent Rebel Branch. Bees are disappearing from the pages of the ancient manuscripts in Council dimension and from the outside world, threatening its very existence. Jaden navigates alchemy’s complexities, but the more she learns, the more she begins to question Council practices. Erasure ― a procedure designed not only to remove individuals from Council dimension but also from the memories of other alchemists ― troubles Jaden, and she uses her ingenuity to remember one of the erased people. In doing so, she realizes the Rebel Branch might not be the enemy she was taught to fight against. Jaden is caught between her responsibility to the Council and her growing allegiance to the rebels, as the Council finds itself at the brink of war. She is faced with an ethical dilemma involving the free will of all humanity and must decide whether or not she can save the worlds.


Can you tell us a little bit about the world that The Alchemists’ Council is set in?


The world of The Alchemists’ Council comprises three dimensions: 1) Council dimension, 2) Flaw dimension, and 3) the outside world.


COUNCIL DIMESNION: As described in the opening pages of the book, “Council dimension is made manifest, perfected, and maintained by the Lapis itself. This alchemically sustained dimension is primeval yet pristine. The grounds are vast and lush and tinged with blue mist at dawn, the gardens abundant with cerulean flora. The courtyard fountain flows with essence-laden waters of the deepest wells, trickling through copper channels amidst the stone buildings — from the main Council Chambers to the edge of the redwood forest. Murals, in ruby and emerald, in citrine and sapphire, as vivid today as a thousand years ago, span the walls of the ritual chambers. The Initiate classroom, with its rosewood desks and terracotta floor, elicits awe in even the most reluctant of students who cross its threshold. Classroom walls are shelved from floor to ceiling with alchemical vessels and powders and liquors and crystals ground finer than the most precious of salts, with parchments and pens and inks so potent that they can change the world in a single point bled from pen to parchment. Such inks, in the hands of the alchemists, manipulate all that is and all that will be” (xiii-xiv).


FLAW DIMENSION: As implied at the beginning of that excerpt, the Lapis (or Philosopher’s Stone) is the focal point of Council dimension. However, the Lapis is marred by the presence of a crack or crevice known as “The Flaw in the Stone.” The alchemists want to remove this flaw in order to achieve perfection. But this Flaw is, in fact, an entire other dimension, where rebel alchemists work to increase the Flaw in order to preserve free will for all people. The philosophy behind this concept is that free will is not possible without imperfection.


OUTSIDE WORLD: This dimension is our own world in contemporary times. Three cities are prominent: Santa Fe (USA), Vienna (Austria), and Qingdao (China). At various points, the characters are featured in these real-world settings because each city houses ancient alchemical manuscripts in a building known as “the protectorate library.” Vancouver (Canada) and Tabriz (Iran) are also featured briefly as locations where the two newest Initiates (Jaden and Arjan respectively) are initially contacted by the Council.


Do you have a favorite scene in The Alchemists’ Council?
Yes, I do: the final scene of Chapter Six (and, in particular, Chapter Six’s final paragraph) is one of my favourites. Going into more detail on this scene would involve a major spoiler. But I can say that the scene involves the connection between tears and amber mentioned earlier in this interview. When I originally wrote the scene, I teared up along with the characters. Recently, other people have told me they share my sentiments. Even my editor has confessed that this passage is her favourite in the book.


Given the number of characters in The Alchemists’ Council, choosing one favourite would be impossible. And none was easier or more difficult than any other. However, two of the most interesting characters for me to write about were Ilex and Melia. My concept for these characters relates to my academic work in medieval alchemy. In alchemical manuscripts, conjunction is a stage in the creation of the Philosopher’s Stone depicted as male and female conjoining into a body known as the alchemical hermaphrodite. Though many alchemists in Council dimension go through the process of conjunction as a sacrament, only one pair—Ilex and Melia—succeed at mutual conjunction. That is, they both exist equally—man and woman—within a single body. Though not physically present through most of Book One, Ilex and Melia play a major role in the overarching plot, which ends on a cliff hanger. The pair will be a primary focus of Book Two. If you would like to read some of my academic work on alchemy (including a piece focussed on the alchemical hermaphrodite), you can find a list of my articles here: https://cyntheamasson.com/articles/.

Cynthea Masson is a professor in the English department at Vancouver Island University. After completing a Ph.D. in English with a focus on medieval mysticism, she undertook a postdoctoral fellowship involving work with medieval alchemical manuscripts at the British Library. In addition to articles on mysticism and alchemy, many of her academic publications over the past decade have been in the area of television studies. She is a co-editor of the academic book Reading Joss Whedon (Syracuse University Press, 2014); her fiction includes The Elijah Tree (Rebel Satori, 2009). She lives in British Columbia. 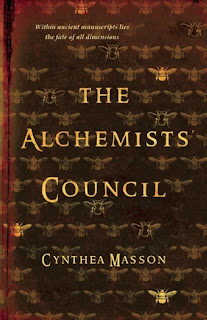 
The first in a phenomenal new fantasy trilogy, where the power of words can change the fate of all dimensions

As a new Initiate with the Alchemists’ Council, Jaden is trained to maintain the elemental balance of the world, while fending off interference by the malevolent Rebel Branch. Bees are disappearing from the pages of the ancient manuscripts in Council dimension and from the outside world, threatening its very existence. Jaden navigates alchemy’s complexities, but the more she learns, the more she begins to question Council practices. Erasure — a procedure designed not only to remove individuals from Council dimension but also from the memories of other alchemists — troubles Jaden, and she uses her ingenuity to remember one of the erased people. In doing so, she realizes the Rebel Branch might not be the enemy she was taught to fight against.

Jaden is caught between her responsibility to the Council and her growing allegiance to the rebels, as the Council finds itself at the brink of war. She is faced with an ethical dilemma involving the free will of all humanity and must decide whether or not she can save the worlds.