UFI welcomes Author Lee Roland. Thanks for Joining us!!

Writers of the paranormal, be it romance or urban fantasy, excel at creating new worlds for their stories.   Medieval worlds, Sci Fi future worlds, dystopian worlds, ethereal worlds wherein dwell the angels and demons—the possibilities are endless.  The modern world can have pockets where magic lives, but no one sees except the heroes and heroines of our books.  There can be vampires and werewolves hiding among us. The alternate histories are intriguing, the worlds where magic is revealed and the populace has to deal with it.

Thus far, my own world building has involved hidden magic within modern society.
In Casual Curses & Meticulous Magic, the world is modern in Ashburn, Florida.  Ordinary city, magical underworld.  Magic is dying and the witches are fading.  It’s up to Melian, the protagonist, to save the vital magic and her people.  She accepts her world as it is and moves through her problems, not well, but with courage.  Her world offers her friends and family to help.  Her magic comes from a distant place that she must seek for renewal.

The Earth Witches Series (NAL 2011-2013) again involves an ordinary city.  The magic lies in the Barrows, a section of town in ruins. The Barrows is hidden from ordinary eyes, but the protagonists see it and its dark evil quite well.  Magic exists in the Earth Witches world, but not in the traditional form as it does in Casual Curses. There are no spells, no potions.  It comes from the witch-warriors, the damaged souls who battle alone.  Their magic rises from the earth itself, deep and old, the first magic.

Lee Roland is a full time writer who lives in North Central Florida. She loves the peaceful rural area where she shares a home with three small dogs who think they are pit bulls and an evil cat with sharp claws.

Lee writes stories of urban fantasy and paranormal romance where strong men and women battle the wickedness hiding under the surface of the modern world.  Her characters are passionate in life and love and are formidable enemies to the malevolent criminals in their worlds.

Her first series, the Earth Witches, was published beginning in 2011 by NAL.  Her website, www.leeroland.com offers samples of the Earth Witches books and information on their world. There are short stories and news of any upcoming books and events. 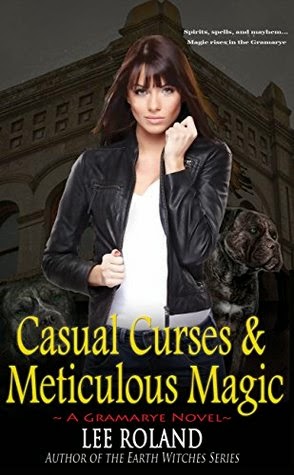 
What happens when a dysfunctional witch and a tough PI work together to save an aging apartment house filled with ghosts, dragons and one oversexed house plant?

Spirits, spells and mayhem…Magic rises in the Gramarye

Melian Devlin is a witch who often resorts to exotic and slightly illegal methods of acquiring money to maintain the 300-year-old Gramarye, the stone apartment house that’s her heart and home. Her life is a series of skirmishes that occasionally end with her behind bars.

Titus Moran is a no-nonsense PI who makes big bucks busting insurance fraud schemes. So how did he wind up in a tortuous battle to keep Melian out of jail? Did the delightful young witch with her gray eyes and magic at her fingertips enchant him—or does the Gramarye hold greater mysteries?

Titus will enter a new exciting world when he joins Melian in her quest to save the Gramarye. Melian will fumble along in her usual impulsive way, leaving a trail of disasters behind her. If they’re lucky, they might survive.

Melian Devlin considered her arrest late Friday evening an ill omen, a portent of dire thingsto come. At the very least, it would ruin her weekend. Her bad luck had continued after her arrest when she’d found herself standing before Judge Franklin P.O. Merkle. Merkle’s exact words were, “You again?”

He’d set her bail at an obscene five thousand dollars.

Psychic readings weren’t illegal in the City of Ashburn, Florida, but selling magic potions  skirted the legal line of medicine, hence her arrest. And then there was the sticky issue of not having a business license—again. Minor infractions. So why did Merkle have such a burr up his ass? Maybe because he was working late on Friday? The malicious cop with an aversion to psychics hadn’t helped either.

Standing behind bars at ten o’clock that night, listening to her Great Uncle Will royally chew her butt, confirmed Mel’s dismal assessment of the situation.

“Psychic?” Will’s deep voice rumbled the word. His tired eyes watched her from a weather worn face. “Mel, honey, you ain’t no psychic. You’re a witch. You’re supposed to use magic.”


He shook his head. “I understand why you can’t get a regular job, but can’t you find something irregular you’re good at? Or at least something legal?” He glanced over his shoulder and pitched his voice lower. “You should’ve marked a cop soon as he walked in the door, then spelled him out of making an arrest. You’re allowed basic self-defense. I taught you that.”

Mel winced at Uncle Will’s words. He had taught her. She was simply incredibly incompetent at casting spells and making potions, and utterly terrified of making a mistake. What if she hurt someone? Pretending to be a psychic and selling a few harmless herbal elixirs was easier—and safer.

They’d put her in a simple holding cell inside the precinct station after she’d seen the judge. The arrangement gave detainees a chance to post bail before they moved them to the main jail downtown, something Mel had hoped to avoid. Prospects didn’t look good.

The sparse cell had a single bench bolted to the floor and air filled with the odor of acrid, nose-searing bleach. Her cellmates, two tough prostitutes, sat on the bench staring straight at the wall. Imperfect witch she might be, but she could still deal with the bullying they tried when she first came in.

“Will, please,” Mel begged. “Go talk to Milo for me. Give him an IOU. I’ll get the money some way.” Milo the Bail Bondsman, her father’s second cousin, usually handled her bail. Milo hadn’t returned any of her numerous calls.

“Yeah. Sure.” Will laughed, but it didn’t sound funny. “Gettin’ money some way is what landed you here. I can hear Milo now. Cousin Melian? She told my Granny Panopoulos to put all her money on a horse named Show-Too in the third race and—”

“I told her thirty dollars to show on the number three horse, not… Oh, hell.” She wrapped her hands around the bars to steady herself.

Granny Panopoulos had cried to Mel about not being able to pay her mortgage and buy food in the same month. She figured Granny could lose thirty dollars and learn an excellent lesson about the futility of gambling. How was Mel to know the woman had fifty thousand dollars tucked in her mattress and a persistent bookie looking over her shoulder? Oh, right, she was supposed to be a psychic.

“Okay, girl, here’s the deal.” Will shoved his hands in his pockets like he always did when he had to deliver bad news. “I’ll get you out on Monday—” “Monday?”

“Yep. I’m not going to call Milo on a Friday evening or ruin his weekend. And I don’t trust anyone else.” Will’s head bobbed. His sorrowful expression tore at her. His eyes remained bright and his mind-dagger sharp, but time had worn his aging body. He loved her, and she shouldn’t have troubled him.

“Ya’ know Mel...” He sighed. “Honey, you’re twenty-seven years old. Couple of days and nights in jail won’t hurt. ‘Bout time you learned a lesson. Past time, in fact. While you’re there, think about having to stay longer, what might happen then.” He turned and shuffled out of the room.

Mel leaned her forehead against the cold hard bars. What a stinking mess. She wasn’t a true psychic, but the power, the magic she lived by, occasionally gave her glimpses into the situations surrounding people. A haphazard thing she couldn’t control, but between it and the potions, she made a little money—as long as some cop with an attitude didn’t arrest her.

Mel had paid little attention when the nervous young man with dark, curly hair entered her low-rent storefront room four hours ago. He had a sweet, shy smile and almost pretty face. Not a hint of a cop in him. He paid her forty dollars for a reading and asked her if he would ever find true love. His precise words. “True love.” That alone should have tipped her off. She felt sorry for him and tried to sell him a magic potion. Only a twenty-dollar mixture of Vitamin B and Ginseng, but with the power of suggestion, it might be enough to adjust his outlook on life. He was far too good-natured and attractive to be alone. Then his partner had charged in and gleefully busted her. It didn’t take much to make some cops happy.
__________________________________