Guest Blog + Giveaway: Through Her Eyes by Deborah Camp

UFI welcomes Author Deborah Camp. Thanks for Joining us!!


Bad, Bad Boy! Yum!
My first ever crush was on a bad boy. James Cagney. Yeah, the actor who is dead. I think I loved him because he reminded me of my dad – and most girls have their first big crush on their dads, right? Also, Cagney often played a bad boy with a big heart that he managed to hide – except from a certain persistent dame! Ah, romance!
I continued to be a sucker for a bad boy, falling head over heels for a boy in grade school, who took a paddling with a smirk. Loved that guy! My first kiss was bestowed by a boy from the wrong side of the tracks. He made my toes curl, he was so baaaad! In college, I fell for a bad boy with a big heart and I still have a soft spot for him when I think back on his mischievous smirk and cocky walk.
My deepest love was for a bad boy who is 8 years my senior. He played musical beds with girls when I first met him. I was a virgin and he kept telling himself to stay away from me because I was too young, too green, and way too much trouble. Well, we all know how that turned out, don’t we? He was my “first” and no one was ever surpassed him. I learned that there was a reason he had a line of girls willing to share the sheets with him. He ruined me for other men, the rake! But I managed to win his heart.
Naturally, when I create a hero he must have a bad boy persona. He’s just no fun if he isn’t a little (or a lot!) dangerous and flawed in some way. I also like the “misunderstood hero” like Mr. Darcy in “Pride and Prejudice.”
The hero in my Mind’s Eye series is a classic bad boy hero and he is – if I say so myself – deliciously bad in the best sense of that word. Levi Wolfe springs from a troubled youth and launches himself into a destructive period as a young man to emerge with “No Trespassing” signs posted all over him, especially on his heart. He’s a gifted psychic and self-made millionaire, but he has never known unconditional love. Into his life walked Trudy Tucker, also a talented psychic, who has done a head and heart trip on Levi. He’s changing for the good – but he’s still bad.
I think what I love about bad boys is their vulnerability. They can take care of themselves. Often, there hasn’t been anyone around they could trust to protect, love, and guide them as they grew from boys to men. Or they went down the wrong path in their youth, disappointed people who loved them, and then felt like they couldn’t make enough amends when they finally regained their footing on the right path.
Levi is one of those walking wounded who feels that he can’t trust people with his deepest feelings and that he’s damaged goods. Women look at him and swoon because he’s a gorgeous specimen of manhood, but they don’t look past his beauty to see the sad beast crouching within his heart. Trudy sees him – all of him – and she still loves him. And that both fascinates and terrifies Levi.
In “Through Her Eyes” there is danger without – a monstrous serial killer – and danger within – explosive desire and tender love between two people who have learned to guard their hearts. Add a dash of paranormal as the two psychics use their incredible gifts to track down a murdering psychopath and you have a truly badass book!
Mr. Cagney, I think, would be proud.
__________________________________

Deborah Camp is the author of more than 50 romances, both contemporary and historical. She received the first Janet Dailey Award (given to a romance novel that best addressed a social problem). "My Wild Rose" dealt with battered women and children.

A bestselling author, Deborah's books have been praised by reviewers, bloggers, and readers who love complex characters and clever plotting. She always mixes in a bit of humor, even in her romantic suspense novels.

Communicating with readers and other writers is something she enjoys, so don't be shy about visiting her online. If you post a review of her books, you'll probably receive a personal "thanks" even if the review isn't entirely favorable!

Deborah lives in Tulsa, OK where she is continually inspired by real cowboys, real Indians, and real heroes and heroines. 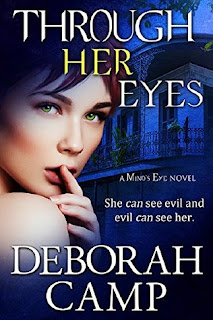 Through Her Eyes
Mind's Eye #4
Amazon


Psychic detectives Levi Wolfe and Trudy Tucker comb the streets of New Orleans in search of a serial killer who has claimed 19 lives and counting.

The suspect was in an accident almost two years ago that left him paralyzed in a wheel chair, but the murders continue. Is he faking it or has he enlisted a protégé to continue his reign of terror?

As Levi and Trudy draw closer to the truth, Trudy discovers new and unsettling psychic abilities in herself.

“So, tell me about your experience,” Trudy said, sitting next to Levi.
“It was strange. Very strange. I was contacted – during a business meeting, mind you – by the dead son of the new contractor I was speaking with in my office. This kid – a salvage yard murder victim – popped into my head and started yelling at me. I tried to shut him out, but I couldn’t. I had to actually stop the damned meeting and tell the man that his deceased son was demanding an audience. Gonzo thought I’d lost my noodle.”
“Good Lord!” She covered her parted lips with her hand. “I’d say that was a heck of a coincidence, but . . .it seems to be so much more than that.”
“Yeah, right.” He sat back and drummed his fingers on the table for a few seconds. “Anyway, the kid – Clayton Nelson – was hitchhiking in New Orleans when a guy in a pickup stopped for him. He couldn’t see much of the man’s face because he wore a ball cap and sunglasses. He had a mustache that looked fake to me. He used the ploy of something being wrong with his truck to get the kid to look under the hood and then he knocked him out with a blow to the head. Clay came to in a basement, his wrists and ankles bound with plastic ties and chains.” He shuttered his gaze from her. “That’s where he was murdered.” A few seconds ticked by before his lashes lifted to reveal his dark blue eyes that never missed much. “You’ve been in contact with the murderer already, haven’t you?”
Her heart jolted. He was uncanny. “I was in contact with someone who’s warped. I don’t know if it was the salvage yard killer.”
“Was he murdering someone?”
“Something. A cat.”
Levi’s upper lip lifted in disgust. “Jesus.”
“Yeah. He was practicing, I think.” She shuddered and blocked out the memory.
“The kid in my head showed me a compass and pointed to the N on it.”
She gasped at the reference. “Your true north?”
“Bingo. His way of telling me that you were already part of this.”
She reached for her glass of juice. They must be destined to examine this case. How else could she explain what happened to Levi and what she’d already experienced?