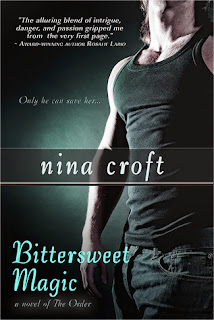 Roz has been indebted to the demon Asmodai for five hundred years, and her freedom is just around the corner. All she has to do is complete one last task for him—obtain a key that had been hidden in a church centuries ago.

Piers, the Head of the Order and an ancient vampire, is intrigued by the woman who comes to him for help. She’s beautiful and seemingly kind, but she’s hiding something. And he’ll find out who she is and what she really wants once he uses his power to get inside her head. But Piers has no idea that Roz is immune to his mind-control...or that he is simply a pawn in her dangerous mission for freedom.

After liking BITTERSWEET BLOOD so much I was a little worried I wouldn't like BITTERSWEET MAGIC but  I worried for nothing. Roz has been in service to Asmodai for five hundred years, ever since she watched her mother burn and begged for help. She has no idea what she is but she keeps a low profile while she completes her tasks to finally gain her freedom. Her final task does not go as planned and she ends up in the company of those that Asmodai has warned her would kill her if they every knew what she was.

Roz is quite the character. She has a great head on her shoulders, she is kick ass and she can hold her own against Piers. Roz had me cracking up many times with her whole nun persona. She has no problem convincing people to see what she wants them to see and I found it highly entertaining. We originally meet Piers in BITTERSWEET BLOOD and he definitely is not that likeable. That all changes in BITTERSWEET MAGIC. He turns out to be a loyal guy that fights for what he cares about. We watch him change right before our eyes as he falls for Roz. They really fit each other well. I have one complaint, there wasn't a lot of world building going on. The story revolved mostly around the characters and I would have liked to see more of the world they live in. I wont spoil who Roz ends up being but know that it is super cool and I loved when Asmodai realized he could have been in deep shit if she would have unleashed herself before she did.

Book 3 should be extremely interesting as we follow Asmodai and his lady match. I am not sure what the final showdown will be all about but I do know that the order is stacking up to have quite a team of supernatural powerhouses to kick butt for their side.