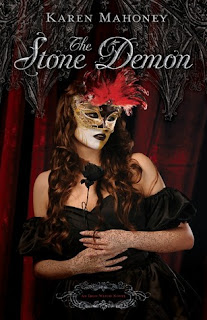 After being tricked into opening the doorway to the Demon Realm by Aliette, the Wood Queen, Donna Underwood is faced with a terrible ultimatum from the newly released demon hordes. They demand that the alchemists deliver the Philosopher's Stone, or their reaper storm will plunge the world into a devastating modern-day Dark Age.

Donna is sent to London, England, where she must complete her alchemist's training and learn how to recreate the Stone. But time is running out. Between facing the vengeful demon king, Demian, and collecting the Stone's elements, Donna realizes she must give her own life in order to succeed. And this time, even braving death may not be enough to save the world.


This is going to be short and sweet as I don't want to give away spoilers.

Donna has been through a lot in her life and has come a long way since book 1. THE STONE DEMON was the completion of her journey and follows her quest to the end. There were a few points in the book that didn't keep me glued to my seat or particularly interested. For the most part I enjoyed the happenings just not as much as the previous two books.. I'm content with the way everything ended. I felt like Donna found herself and figured out who she was by the end and that was the whole point of her journey. Those most important to her all had a place in the final installment of The Iron Witch Trilogy and all were important to getting Donna to the end. If you read the first two books in the series you can't NOT read THE STONE DEMON.