Promo + Giveaway: Avenged by a Highland Laird by Sky Purington 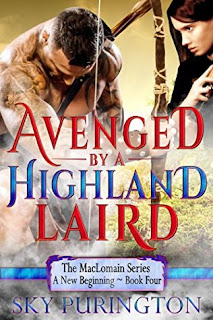 Avenged by a Highland Laird
The MacLomain: A New Beginning #4
Amazon

Laird Bryce MacLeod will do anything to see Scotland’s history saved. Even if it means chasing down Jessie, a twenty-first century lass who might very well be his enemy. What he discovers when he catches her, however, is someone with deep, dark secrets and unanticipated intentions. Hidden truths so remarkable a whirlwind adventure through time begins.

First, they find themselves in league with Angus Óg MacDomhnaill, Lord of the Isles, a noble Scottish captain rumored in some circles to be a pirate. Danger and intrigue abound as they help the Scots capture three English supply ships and deliver their cargo to the Scottish army. As they do and more mysteries are unveiled, attraction ignites and roars to life.

Caught in the throes of newfound passion, they finally join King Robert the Bruce and face off with the English once more at the Battle of Byland Moor. Yet there’s another enemy as well. An evil whose sole purpose is meant to test their hearts in a way neither saw coming. An enemy determined to rip Jessie away from Bryce forever. Will the power of love be strong enough in the end? Or will the curse that threatens Scotland be too much to overcome?

Find out in Avenged by a Highland Laird, the epic conclusion of The MacLomain Series: A New Beginning.


She didn’t miss the flash of disappointment in his eyes before he managed a small nod and held out his hand. “Aye then, lass, step around me.”
Jessie clenched her teeth, disappointed that the small bridge they had built was so swiftly knocked down. That he was so quick to dislike her again. But that wasn’t to be worried about right now.
Well aware time was running out, she carefully turned, so she was facing the wall, took his hand, and began moving. Step by step, she made her way along the ledge to the point where they would have to share a space.
She met his pale golden eyes and tried to ignore the flustered way they made her feel. “Are you ready for me to pass?”
“I am,” he lied.
She could tell by his guarded expression he was nowhere near ready. Not because he was a coward but because he was aware of his effect on her. More so, how much he liked it. His wariness had nothing to do with plummeting to their death but allowing her close enough that she could pass. Feeling the heat of her skin.
So a bridge might have been knocked down, but something else was taking its place. She worked to steady her breathing at the quickly escalating attraction between them. Now was most certainly not the time.
Yet she had known this would likely happen, didn’t she? That it would be unavoidable. At least for her. How else could it be considering the secrets she still kept? Secrets she was foolish enough to have thought she could keep from him for his own safety. But then she had very little real-life practice when it came to attraction. Especially the sort she felt being so close to Bryce. He was the real thing and far more then she anticipated.
However, now definitely wasn’t the time for a chat about deep dark secrets that would only upset him further.
They needed to keep moving.
Though tempted to close her eyes so she didn’t drown in those piercing golden orbs of his again, she kept them open and made her move. With her hand braced on the left side of his waist, she began moving along the front of him. She was halfway across and directly in front of him when he touched the side of her waist, lowered his lips close to her ear and whispered, “Dinnae move, lass.”
His words floated through her mind. “There is a stranger standing across the way.”
“I feel him,” she responded as her eyes rose to his. “He doesn’t see us yet.”
Though she thought it was her breath that caught when they’re eyes met, it might have been his. Alarmed by the impact of being this close, she nearly teetered back, but his arm slipped around and pulled her even closer.
Unable to breathe at all now, she didn’t look away. She couldn’t if she wanted to. “Let me go, and I’ll hide us without him knowing.”
Unmistakable heat gathered in his eyes. Heat and desire he warred to contain, but she saw it…then she felt it as his arm tightened. The pale gold flecks in his thickly lashed eyes only grew brighter with curiosity. While she could tell herself that he simply wondered how she would get them out of this, she knew better. His curiosity was entirely focused on the strong chemistry between them.
Despite the waterfall’s intense spray and the fact an enemy could very well be staring at them right now, she was human enough to get caught up in what was happening between them. How it felt to finally be pressed against his long, hard body.
To finally lay her hands on the physical form of someone she had known for so long.
“No,” she whispered, suddenly frightened as heat swept through her. “Not now. Not yet.” She swallowed hard and shook her head, suddenly lost in memories. No matter how real this might be, she had long trained herself that she couldn’t trust lustful feelings when it came to him. That she should not indulge in them. “Let me go. Please.”
Though her response could simply be that of a woman choosing to reject what flared between them, he seemed to sense there was more to it. His arousal turned to protectiveness as his brow furrowed in determination and his grip tightened ever so slightly. She couldn’t help but wonder if he was inherently responding to her past. To those moments he was so much a part of without ever knowing.

Sky Purington is the bestselling author of nearly forty novels and novellas. A New Englander born and bred who recently moved to Virginia, Sky was raised hearing stories of folklore, myth, and legend. When combined with a love for history, romance, and time-travel, elements from the stories of her youth found release in her books.