As he followed me down out of the attic, with me guiding him to the bottom, my attention returned to the trunk. Bryan Tierney was handsome, but this trunk had belonged to my mother, and now all I could think about was what I might find inside. Maybe Avery’s ring? Or some clue as to where she had gone.
“Now I have a question for you,” he said as he lifted it onto the table. “And if you don’t want to answer, feel free to bitch-slap me. I deserve it.” He was laughing with his eyes again, their blue intensifying.
“Ask, then.” I pulled the key out of my pocket, suddenly feeling a bit shy.
“Why did your mother run away? Your grandmother told me a little about her—that she disappeared, leaving you behind.” He was standing close enough for me to feel the warmth radiating off his body and it sent a tingle up my spine . . . a good one that made it hard to think about anything else.
I stared at the key in my hand. “I don’t know. I’m hoping to find something in this trunk that will tell me what happened. Why she abandoned me. My father vanished before I was born. His mother told me that he went out to Timber Peak on a hunting trip and was never seen again. He wanted to marry my mother, but . . .”
Bryan motioned to the table. “Do you want me to step away while you open that? Or leave? I can understand this might be a private affair.”
I considered his question. There was always the chance something in the trunk would make me burst into tears. Or maybe . . . maybe it was just garbage, or old memories that I wouldn’t relate to. After a moment I said, “No, stay. I barely knew her. I was three when she left.”
As I fitted the key into the lock and turned it, the air grew thick. Mist began to rise around me—the kind that always signaled some spirit near—and I opened myself up, searching for where it came from. As I creaked back the lid, I saw a light jacket, folded and sitting on the top of whatever else was in the trunk. I recognized it—my mother had worn it the day when she spun me around in the grass. As I slowly pulled it out of the trunk I noticed there was something on it. Spread across both sides of the chest was a reddish brown stain surrounding what looked like a bullet hole. As I stared at it, a faint cry rose up and I glanced over to see a young woman squatting beside the table. She was weeping, her hands raised to ward off something. Bryan was watching her, too.
“Who is that, Kerris?” His voice was so soft I could barely hear it.
Horrified, I watched the cowering ghost. “My mother. That’s my mother, Tamil. And that means . . . that she never ran away. She’s dead, and I think the blood on this jacket is hers.” I turned to him, stammering out the words. “I think my mother was murdered.” 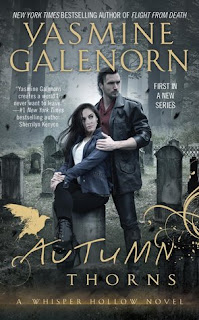 
In an all-new series, New York Times bestselling author Yasmine Galenorn invites readers to Whisper Hollow, where spirits walk among the living and the lake never gives up her dead…

Fifteen years ago, I ran away from Whisper Hollow, Washington, a small town on Crescent Lake in the Olympic Peninsula. But truth is, if you were born here, you can never really leave. I’m Kerris Fellwater, and when I returned, I inherited my grandmother’s house—and her gift. As a spirit shaman, it’s my responsibility to drive the dead back to their graves, because around Whisper Hollow, people—and secrets—don’t always stay buried.

When I was little, I was told my mother ran off. But now it looks like she was murdered. With the help of my mysterious neighbor Bryan, we begin to unravel the mystery of her disappearance, and in doing so, unearth a dark force seeking to bury Whisper Hollow. Now I must work with the dead, rather than against them, because our enemy will do whatever she can to destroy the town, and she means to start with me.

The blurb for AUTUMN THORNS reminded me a lot of Indigo court so going into the book I thought it might be too similar for me to really enjoy, but I was in for a surprise. The characters felt different, the setting felt different and the storyline was it's own.

Kerris was my kind of heroine. She jumps into danger, but knows when she needs help and asks for it. She is strong and determined to get down to the nitty gritty, she's dependable and she's a loyal friend. She was just all around likable and fun to get to know. I really enjoyed watching Kerris and Bryan's connection grow. I knew right away what they meant to each other when Bryan showed. Watching Kerris not get it for a bit was a bit frustrating, but when everyone was on the same page their relationship was clearly strong and meant to be.

The world building was so great that after reading AUTUMN THORNS I felt like I had visited Whisper Hollow. There was tons of danger involved in the whole book and the plot moved at a nice pace. There was a lot of investigative work going on as Kerris and her friends tried to solve the mystery. On the subject of friends, I loved Peggin and can't wait to see her in the next book.

I have loved some of Yasmine's series—Indigo Court—, enjoyed some of her series—Otherworld/Sisters of the moon—, and liked ok, but probably won't continue others—Fly By Night. I am happy to say that the first book in the Whisper Hollow series, AUTUMN THORNS, has made my love list and I am hoping that continues when I pick up book 2.


Yasmine Galenorn is the New York Times, Publishers Weekly, and USA Today bestselling author of the Otherworld Series (Sisters of the Moon) and the Indigo Court Series. She currently resides in Washington State with her husband.