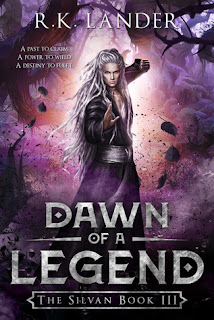 Dawn of a Legend
The Silvan, #3

Book three in The Silvan, a best-selling series by award-winning author R.K. Lander. “Page-turning epic fantasy you will not be able to put down.”

A past to claim

A power to wield

A destiny to fulfil

To the enemy, Fel’annár is just a half-blood bastard, but to the Silvan people, he is their crownless warrior prince. Returning from battle in the mountains, he grieves for one who was lost, a death that triggers a mystery Fel’annár and his company of chosen brothers must unravel. But why do the trees speak of a beautiful monster?

Fel’annár will learn the ways of the Kah Warrior from a legendary commander while facing the disdain of another who struggles to accept this ‘ignoble son’ for who he is, not for what he represents. Meanwhile, Fel’annár’s royal half-brother reveals a plan to restore the Great Forest to its past splendour of multi-cultural harmony. But the Forest is falling apart under the final onslaught of a ruthless traitor and the Silvan people are turning away from their ruler. Can Fel’annár come to understand what role he must play in this plan before it is too late? Can the brothers put aside their resentment towards each other for tearing their families apart and learn to trust one another? Can love prosper in the midst of battle and hardship as dark enemies converge on the Motherland?

Danger lies in wait for an elf who is slowly coming to terms with his heritage, learning to wield a natural ability and accepting the nature of his unfolding destiny.

The greatest warriors of their time will come together once more—in the name of justice. In the name of love.


The thud of an arrow piercing flesh, a cry of pain from an elven warrior who was thrown to the floor with the force of the bolt.
A roar of anger, a plea for aid, the scream of a defeated soldier, the desperate sounds of elves and Deviants locked in combat, fighting and dying in the frigid cold. But Fel’annár did not flinch, even though he stood in the midst of the chaos. He couldn’t; he was the only master archer left, the only one who could eliminate the Deviant snipers that were picking off their warriors.
He sighted his next target, stance perfect; it had to be. His arm did not waver, it could not, and his heart did not feel; it must not. He would not allow that, and when the last sniper was down, he whipped out his long and short swords with a morbid sense of satisfaction and moved closer to Captain Comon and The Company’s position, where the fighting was at its worst.
The shriek of polished metal upon rusted iron grated on their ears, but it did not deter the Alpine warriors of Tar’eastór, even though they had been fighting almost constantly for the last weeks. They bore down upon the rotting mass of Deviants that had thought to surprise them, their elven faces twisted into snarls of hatred for an enemy that was relentless, ruthless.
“Behind you,” warned Fel’annár as he moved closer to his captain to engage another Deviant, whose massive scimitar swung unnervingly close over his head. Shocked, he flipped backwards to gain space and time and then moved to the side and scored a blow to the Deviant’s shoulder. But that only served to enrage it. Roaring in unbridled wrath, the beast bore down on Fel’annár with such strength it sent him stumbling backwards. What was wrong with him? Yet even as he asked himself he knew the answer: he was tired, his concentration slipping, and this opponent was not going down easily.
Swivelling his right sword to the left, he whirled around and sliced into its other side, garnering another unearthly shriek that vibrated painfully in his ears.
He moved in from the front this time, but the beast’s counter blow was so strong it was all Fel’annár could do to keep his sword from flying out of his sticky hand; he was off balance once more, and the nascent tingle of dread began to take hold of him.
Fel’annár raised both blades and brought them down upon his enemy, but they were blocked, and for one strange moment, bright green eyes locked with the cloudy but challenging gaze of the Deviant. There was hatred and cruelty there, as there always was; he had expected that, but Fel’annár hesitated, for there was something more, something he could not place. His brow twitched in confusion, but before he could ponder it any longer, the handle of the Deviant’s blade caught him in the side of the head with a heavy thud, sending him stumbling backwards and then, to his utter horror, to his knees. He was down, and he desperately blinked to clear his reeling mind, not fast enough to avoid the boot that crashed into his mid-section, sending him gasping to the floor. It was all he could do to roll out of the way as the scimitar came down upon him, missing him by mere inches, a blessing in disguise, for the beast had placed so much weight behind the blow that it overcompensated. Fel’annár had just enough time to plunge both swords into its mid-section.

I write epic fantasy for adults. I love battles, warriors, great adventures - elves, monsters and generally weird things, but above all, I love a good story with compelling characters.
My first project is The Silvan Series, with book three, Dawn of a Legend ready to launch April 2019. I hope you'll enjoy my stories and perhaps click the 'follow' button. And I would love to see you over at rklander.com. You'll find some story extras there and freebie if you're interested.