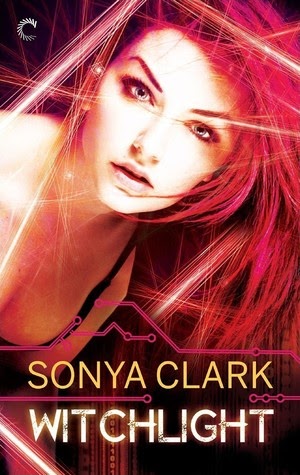 In 2066, the Magic Born are segregated in urban reservations. The laws do not protect them, or their allies.

Councilwoman Elizabeth Marsden is a powerful player in New Corinth politics, but a closely guarded secret could destroy her life—she's a hidden Magic Born. Her family has gone to great lengths to erase all her magic-related records, until a trancehacking outlaw discovers the last remaining one…

Vadim Bazarov smuggles Magic Borns through the underground railroad and threatens to reveal Elizabeth's secret unless she helps him access blank ID cards. Elizabeth wants to hate him for having a stranglehold on her life, but can't help being attracted to someone so sure of who and what he is.

Vadim initially sees her as a political ice queen, but is intrigued by her suppressed magical abilities. He trains Elizabeth to use her magic, and before long finds himself falling for her. But their newfound love may be shortlived; an anti-magic ordinance forces one of them to make a choice that will change both their lives for good.


Vadim played a pretty big roll in TRANCEHACK and we got to know him a bit more than other secondary characters so I was glad to see he was being featured in WITCHLIGHT. He comes off as a pretty big bad boy and even though he is one, we get to witness his softer sides throughout WITCHLIGHT. Elizabeth (Lizzy) is new to us but we quickly get a feel of her personality and struggles as a Councilwoman and Magic Born in hiding. She has a lot of struggles in book 2 of the Magic Born series. She has to put her trust in someone that knows her secrets, learn to control her out of control magic and make some tough choices along the way.

The relationship between the two starts off pretty hot, takes a turn to luke warm when Vadim blackmails Lizzy and gets right back in the hot zone as they work together and get to know each other. By the end of the book they are of course in love and both of their lives are changed forever (Lizzy has the biggest change though).

They make a few appearances but I wish we would have seen more of Nathan and Calla together in WITCHLIGHT. I always like to have previous characters more involved in each book where different couples are featured. I really didn't get a feel for who might be featured next but I have a few characters I would like to see featured. Either way I hope that Clark gives us a nice glimpse into how Nathan, Calla, Vadim and Elizabeth are doing as their story is told.

I also would love to see more world building. We have a feel for the world the characters live in but it feels like we should know so much more by now. Even with my small complaints the Magic Born series has lots of promise on its side and I will continue it into book 3.