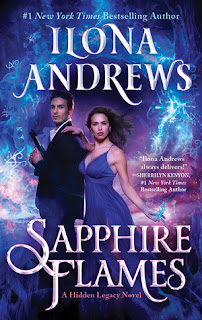 In a world where magic is the key to power and wealth, Catalina Baylor is a Prime, the highest rank of magic user, and the Head of her House. Catalina has always been afraid to use her unique powers, but when her friend’s mother and sister are murdered, Catalina risks her reputation and safety to unravel the mystery.

But behind the scenes powerful forces are at work, and one of them is Alessandro Sagredo, the Italian Prime who was once Catalina’s teenage crush. Dangerous and unpredictable, Alessandro’s true motives are unclear, but he’s drawn to Catalina like a moth to a flame.

To help her friend, Catalina must test the limits of her extraordinary powers, but doing so may cost her both her House–and her heart.


There has not been one Ilona Andrews book that I haven't loved and SAPPHIRE FLAMES was no different.

I'm not going to lie, I really love Nevada and Rogan. I was scared that I wouldn't like Catalina and Allessandro as much. Thankfully, they proved me wrong really quickly. I enjoyed getting to know Catalina and her abilities more. I also liked seeing her step up for her family now that Nevada and Rogan have other responsibilities. She has a lot of work ahead of her, but I think she is willing to learn so that her family stays safe. Allesandro is still a big mystery, but we learn that there is more to him than the playboy persona he allows the world to see.

There isn't a lot of romance in SAPPHIRE FLAMES. Catalina is fighting tooth and nail to avoid him for most of the book, but she is totally into him. Allesandro has a LOT of secrets and I don't see anything of substance happening between the two until some of his secrets come out. Hopefully that will be quick as I really like them together and want to see them just as strong as Nevada and Rogan.

I loved the fast pace and action in SAPPHIRE FLAMES. The car chase was pretty epic. I absolutely love how Ilona Andrews brings their world alive through their words. I felt like I was right there in the car with her characters and I was on the edge of my seat through the whole ordeal.

I will continue to read everything this writing pair puts in front of me and I'm excited to see what Catalina and Alessandro do next.