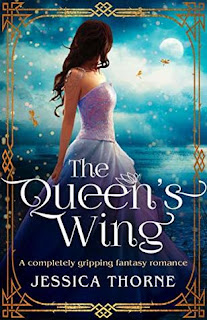 Bel, born to nobility, would do anything to spend her days alongside her brothers – soaring through the heavens in her beloved flyer. She’s faster than any of them, but she knows her days in the skies are numbered.

When a surprise attack on the palace lands Bel’s father on the throne, her life is forever changed. In order to secure her father’s empire, Bel must travel to a distant land to marry the recently widowed young ruler, Conleith.

But Bel’s new home is less than welcoming: compared to the refined ladies at court, Bel seems like a wild woman, and assassination attempts, treason and mystery threaten her at every turn. With a growing attraction to Con, her life is further complicated by the attentive leader of her bodyguards – a warrior called Shae whom she has loved since childhood…

A heart-stoppingly magical new novel that will keep you turning the pages. Perfect for fans of The Selection, Bella Forrest and Sarah J. Maas.


THE QUEEN'S WING had me wanting more pretty quickly upon starting to read it.

I enjoyed Bel from the get-go. She has a strong personality. Her determination and strength really drew me to her. She was willing to do what was expected of her, but she was still determined to be her in the end.

The romance wasn't out of this world. There is a bit of a love triangle that puts a damper on some things. Bel and Shae have known each other forever and I'm sure could have had a great romance if they were allowed too, but I felt like I could have done without their feelings for each other getting in the way. I felt like Bel and Con had a great connection when they allowed themselves to actually enjoy and understand each other. I wish they could have come together a lot sooner than they did.

The world was super interesting and I enjoyed the action involved in THE QUEEN'S WING. I enjoyed THE QUEEN'S WING and I already have book two, THE STONE'S HEART on my wishlist—even though it looks like we have some different main characters.