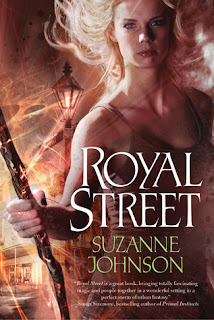 
As the junior wizard sentinel for New Orleans, Drusilla Jaco’s job involves a lot more potion-mixing and pixie-retrieval than sniffing out supernatural bad guys like rogue vampires and lethal were-creatures. DJ's boss and mentor, Gerald St. Simon, is the wizard tasked with protecting the city from anyone or anything that might slip over from the preternatural beyond.

To make it worse, Gerry has gone missing, the wizards’ Elders have assigned a grenade-toting assassin as DJ’s new partner, and undead pirate Jean Lafitte wants to make her walk his plank. The search for Gerry and for the serial killer turns personal when DJ learns the hard way that loyalty requires sacrifice, allies come from the unlikeliest places, and duty mixed with love creates one bitter gumbo.

ROYAL STREET takes place during and after Hurricane Katrina in New Orleans. Druisilla takes off to safety at her Grandmas house but her mentor Gerald St. Simon goes missing. Now that the borders between her world and the Underworld have crumbled Druisilla becomes the target of a dead pirate as well as a voodoo god. To make matters worse a sexy new partner walks into her life sent by the wizard elders.

Druisilla (DJ) is a junior wizard trying to figure her way through what she is capable of. She tended to jump before thinking, and made bad decisions anyways but I still found it enjoyable to follow her. I loved Alex. He jumps into the book by rescuing DJ from a dead pirate Jean Lafitte and never left. He was always surprising me with what was revealed about him next. There was a great array of characters, we had bar owners, dead legends, pirates, voodoo gods and assassins. The author does a great job of incorporating the events around Hurricane Katrina and using real life descriptions that brought everything into picture. There is a bit of a love triangle between DJ, her bodyguard/partner Alex and his cousin Jake. I have to say it was a bit of an annoyance because all along I could really only see her with Alex so Jake ended up annoying me when he probably wouldn't have otherwise.

Book one is filled with a lot of background and what I would consider build up for book two. The ending is left open but isn't cliffhanger-ish. Overall I enjoyed it and will be reading book 2.