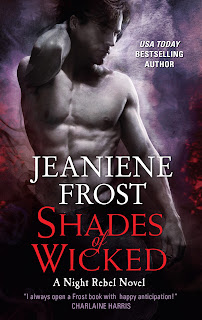 Master vampire Ian is unrepentant, shameless…and every shade of wicked. He’s made one too many enemies in his two centuries of existence, including Dagon, a demon who now lays claim to his soul. Ian’s only chance to escape Dagon is to join forces with a Law Guardian, but he’s never been able to abide by the rules for long.

Veritas’ normal role is police, judge and jury to reprobates like Ian. But she has her own ax to grind with Dagon, so if she can use Ian as bait…well, all’s fair in law and war. As they scour supernatural hotspots to perfect their trap, Veritas soon realizes Ian’s devil-may-care, roguish image hides something much more powerful. And Ian discovers that Veritas has shocking secrets of her own. As they’re drawn to each other with a passion as intense as their peril, either love or justice will prevail. But each will have devastating consequences…

JEANIENE FROST is the New York Times, USA Today, and international bestselling author of the Night Huntress and Night Prince series, as well as the Night Huntress World novels. To date, foreign rights for her novels have sold to twenty different countries. Jeaniene lives in Florida with her husband, Matthew, rarely cooks and always sleeps in on the weekends. Aside from writing, Jeaniene enjoys reading, poetry, watching movies with her husband, exploring old cemeteries, spelunking and traveling — by car. Airplanes, children, and cook books frighten her.

To celebrate the release of SHADES OF WICKED by Jeaniene Frost, we’re giving away a paperback copy of Once Burned, the first book in the Night Prince series, to one lucky winner

GIVEAWAY TERMS + CONDITIONS:  Open to internationally. One winner will receive a paperback copy of Once Burned, the first book in the Night Prince series, by Jeaniene Frost. This giveaway is administered by Pure Textuality PR on behalf of Connie Suttle.  Giveaway ends 11/9/2018 @ 11:59pm EST. Limit one entry per reader. Duplicates will be deleted.
CLICK HERE TO ENTER!