UFI welcomes Author Jane S. Morrissey. Thanks for Joining us!!

So many things! One of them is that I’ve traveled quite a lot in life and lived all over the world which is one of the reasons I wanted this series to be a more global experience.

At the moment, I have a two-year old at home, so “down time” seems like a thing of the past. It’s okay thought because I have a full-time job I thoroughly enjoy, I somehow manage to carve out time to write, and love spending time with my child. Going through the world at the pace of a 2-year old forces me to slow down and take in the world around me in a different way.

When I first started writing, I realized what I’d been missing in my life. It was a little like starting a meditation practice for me – which I have also tried on and off over the years. Everything settles down when I was writing and I felt a freedom I’d never experienced. Life is easier and makes more sense when I’m writing.

My life before having a child, was to wake up early to write every morning for an hour or two before work. Now it all depends on how much sleep I get and how early the house is hopping. It has forced me to be more adaptive and squeeze my writing in where I can. I’m hoping to be able to return to more of a routine in the years to come, but for the moment – this is one of my challenges. It gives me lots of good excuses to explain away writer’s block!

My very favorite book, which I re-read probably once a year, is Red Heart of Jade by Marjorie M. Liu.

How would you pitch Quytel Series to someone who has not heard of it before?

A globe-trotting, paranormal thriller. Each story is grounded in a romance set against the backdrop of several unfolding arcs that stretch into the realms beyond Earth.

Can you tell us a little bit about the world that Quytel Series is set in?

In the world of the Quytel, there are seven Circles, each by a defined geographic territory. The Quytel have psychic abilities and have been tasked with maintaining the balance of psychic power on the planet. They are the arm of justice for all others with supernatural abilities, shapeshifters, elementals, mages, and others who are mostly hidden and marginalized in the backdrop of our normal world.

Born with psychic abilities and branded with genetic markers, those who are chosen and survive a deadly initiation become Quytel. Three Judges, three Seekers, seven Warriors, and a Commander make up a Quytel Circle. Seven Circles are bound to specific geographic territories on Earth. Through near immortality, powerful psychic abilities, and an unbreakable bond that ties them together, they are the servants of justice.


Do you have a favorite scene in Circle of Flames?

I have several, and here is a sneak peak of one of them:

Sighing, even more tired of her own story than usual, she started up her front steps. Halfway up, she stopped, heart pounding at the sight of a large man sitting on the loveseat on her porch, half hidden by deep shadows.
She knew him. She was sure she’d never met him, but she knew him. His face kept flashing in her mind, sex and danger. Who was he?
“Rough night, Emma?” His deep voice said her name like a sigh on a warm summer breeze. Tingles of desire licked all over her body, settling low in her belly.
Emma’s heart pounded, sparks building into fire, while fear plucked the strings of her nerves like an out-of-tune banjo.
“Who are you?” She was a fool for not running straight back to her car and calling the police.
“My name is Darius.”
The name fit, another piece of the puzzle falling into place.
When he stood he was far taller than she’d expected, broader across the shoulders, with powerful arms and legs, clearly comfortable using his strength to intimidate. Well, she refused to be intimated by him. Fire swirled close, more under her control.
Darius walked to the top of the stairs, near enough that she caught the scent of sandalwood and moss. It teased her senses; tendrils of familiarity trickled along the edge of her awareness.

Which one character out of all your books was your favorite to write about? What about the hardest to write about?
In each book, there is one character who stands out more than the rest and that I enjoy writing, but throughout the series, I would have to say my favorite is Mack. He is a strong secondary character in Circle of Dreams and Circle of Flames . . . the 3rd and 4th books in this series will be coming out in 2019 – and Mack will finally have his story told!

Jane Morrissey is a paranormal romance writer who loves romance, magic, and writing. Her paranormal romantic mysteries will keep you reading late into the night. Jane spends her time writing, enjoying the glorious California Coast near her home and spending as much time as she can with family and friends. 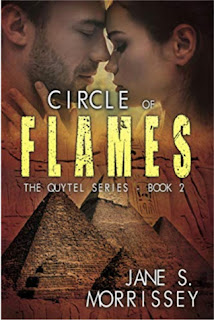 
Sent back to his homeland to investigate the disappearance of psychic children, Darius Curilian must face the haunting truths of his past. In a remote village, Darius and his team arrive too late to stop a kidnapping but discover a beautiful stranger who could hold the key to finding the missing children.

A self-defined loner, Emma Williams has always been different. Fire breathes in her soul and has set her apart from everyone her whole life. When she stumbles upon a child in danger, she falls into Darius’s unwilling arms and is pulled into the dark world of the Quytel as they fight for their lives.

For her safety and ours, Darius reminded himself.
“Scotch?” Emma emerged from the kitchen with two tumblers half full of amber liquid. “I don’t know about you, but I could use a drink after the last couple of days.”
She’d changed into a comfortable looking pair of cotton drawstring pants and a spaghetti-strap tank, leaving a tempting part of her flat belly revealed. Padding into the room on bare feet, her dark, silk-red hair brushed her jawline and fell to her shoulders. His cock hardened.
He stood and crossed the narrow room, taking the glass she offered him. “Thank you.”
“Cheers.” She raised her glass and sat on the loveseat, tucking her feet under her. “So what now?”
“I should leave.” He didn’t move, feeling the weight of Sita’s vial in his pocket. He took a long drink of the scotch and savored the smoke on his tongue.
“Will I see you again?” Those lapis-lazuli eyes met his. They reminded him of Egyptian jewels watching, waiting, her pale skin illuminated by the soft, yellow glow filling the room.
“I’d like that.” He chased the implication of his statement with another swallow of scotch burning his throat. Just because he wouldn’t ever see her again didn’t mean he wouldn’t want to. He was dead certain one night with her would do nothing to quench his hunger.

a Rafflecopter giveaway
Posted by StacyUFI at 3:30 AM No comments: 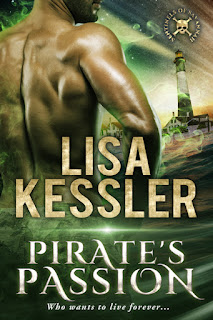 
Samuel Keegan used to man the wheel of the Sea Dog over 200 years ago, but these days he’s the front man of a southern rock band. Rum and women are plentiful, but his world is changing rapidly now that his crew is back together searching for the Holy Grail to break their curse. But the quest leads him to a historian with raven hair and a wicked smile. She holds all the answers, but she could also spell death for them all.

Dr. Charlotte Sinclair works for the Maritime Museum in Savannah, an expert on ancient pirate wrecks. When a government agent requests her help in a top-secret investigation, she discovers not only is the Holy Grail real, but the lead singer of her favorite band is actually the immortal pilot of the Sea Dog crew.

The search for the Grail opens some dark secrets better left hidden, and Charlotte's life might depend on one Pirate's Passion...

LISA KESSLER is an Amazon Best Selling and award winning author of dark paranormal fiction. Her debut novel, Night Walker, won a San Diego Book Award for Best Published Fantasy-Sci-fi-Horror as well as the Romance Through the Ages Award for Best Paranormal and Best First Book. Her short stories have been published in print anthologies and magazines, and her vampire story, Immortal Beloved, was a finalist for a Bram Stoker award. When she’s not writing, Lisa is a professional vocalist, performing with the San Diego Opera as well as other musical theater companies in San Diego. You can learn more at http://Lisa-Kessler.com She loves hearing from readers!

To celebrate the release of PIRATE’S PASSION by Lisa Kessler, we’re giving away for a $25 Amazon gift card!

GIVEAWAY TERMS + CONDITIONS:  Open internationally. One winner will be chosen to receive a $25 Amazon gift card. This giveaway is administered by Pure Textuality PR on behalf of Entangled Publishing.  Giveaway ends 11/2/2018 @ 11:59pm EST. Entangled Publishing will send one winning prize, Pure Textuality PR will deliver the other. Limit one entry per reader and mailing address. Duplicates will be deleted.  CLICK HERE TO ENTER!