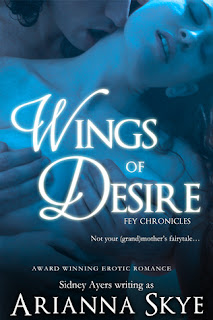 I wont rehash what the story is about because the blurb above does a pretty decent job of that so I will just jump into my thoughts.

I found Rhiannon not suspicious enough in some instances and way to suspicious in regards to others. Cerne was a perfect fit for Rhiannon and when they let themselves be together. Their passion was high and came out in each paragraph. There tended to be a lot of tension due to misunderstandings and incomplete information given between Rhiannon and Cerne at all moments throughout the book. There are a lot of graphic sex scenes if your not into that I would pass on this book, they in no way bothered me though. Arianna's Faerie's are definitely Portrayed as nymphos. There is a wide array of characters to get to know. I loved how Arianna portrayed the Faerie realm it wasn't like most fay books and provided some unique new views to read about. There were some points throughout the book where things were slow and wish it would have sped up and others that were rushed when I would have liked it to be slower paced.


I wasn't thrilled about the ending, Rhiannon was very consistent on her want to go back home to visit and I would have liked to see that happen and see how it played out with her new changes. I have not read anything about this being part of a series but I think there is much more story that could be told. WINGS OF DESIRE overall was a easy read with lots of steamy scenes and a good plot to boot. I would read more.