UFI welcomes Author Abigail Baker. Thanks for Joining us!!

10 Stages of Getting Your 1st Tattoo…or Your Last Deathmark
In honor of the release of my debut paranormal romance, THE REAPER’S KISS, I give present to you the tumultuous process behind deciding on and getting that first tattoo.
Make sure to check out THE REAPER’S KISS to find out what could happen if you get that Deathmark. And then let me know if you’d still get one. (Psst: I do)

Abigail Baker shares her home with a Siamese cat endearingly named “The Other Cat” and two rescued mutts with mundane human names that people think are cute. In addition to writing about rebellious heroines, she enjoys hiking, discovering craft beers, baking the perfect vanilla bean cupcake, and rock climbing (going as far as scaling 800 vertical feet to the summit of Devil’s Tower National Monument in 2013).

Abigail won first place in the Rocky Mountain Fiction Writer’s 2010 Colorado Gold Writing Contest for Romance for THE BLOODSUCKER and first place in RWA’s Golden Network’s 2011 Golden Pen in Paranormal Romance for TATTOO OF YOUR NAME ACROSS MY SOUL (now THE REAPER’S KISS, Deathmark Book One). She regularly blogs about life observances, lives at the base of the Rocky Mountains, and can be easily found hiking any of Colorado’s best trails. 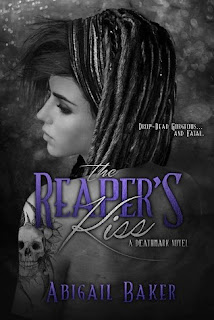 Ollie Dormier's tattoos are deadly. She is a Scrivener—an employee for Death—and her skull tattoos mark her clients for their demise. She does her job, and she stays out of trouble. But when her hands start to burn hot and fierce, and her control goes leaping out the window, all hell breaks loose. Ollie is showing the early signs of being a Master...demonstrating power that is forbidden.

That power is exactly what Reaper Brent Hume is counting on. A hot, scruffy rebel, who does marvelous and terrifying things to Ollie's insides. Now he needs Ollie's help—and her skills—to overthrow the evil and corrupt Head Reaper. That is, if he can figure out a way to keep this hot-handed girl cool...and keep his hands off.

After raiding Lethe, the underground lair of the Head Reaper, Brent and I convened around a piping hot radiator in my livingroom. The temptation to sit on it and warm my buns was there, but I resisted. What was impossible to resist was standing side by side with Brent without touching. And the more we sought warmth, the closer we became. Too soon we were all but hugging in effort to regain our body heat.
Had he suggested removing our clothes, I would not have partaken. I would have liked to know what the rebel Brent Hume was like in the bedroom, but not right before Lethe, in Lethe, or after Lethe, and certainly not standing over a radiator, shivering ourselves silly.
My clicking teeth slowed as the radiator, and Brent’s body heat, melted a layer of ice on my clothing. “Did you... you get the Reaper’s name?”
He pulled down the collar of his shirt to expose a white notecard inside a plastic bag—the prize from Lethe. A name was scribbled on it, but from what I could see the writing had bled. Brent noticed a second after me.
“Mother fucker,” he groused. “The ink got wet.”
“Of course it did.” It was too much energy to roll my eyes. For now, I needed heat. Lots and lots of heat.
He held the baggie up to the overhead light. “I see a name. Baird.”
“Is that a last name or first? Is it a male or female? Who is it?” My shivering worsened my panic, which in turn worsened my shivering. “We did this all for nothing, didn’t we? Didn’t we?”
“Good Hades, calm down, Scrivener.” He turned from me when I tried to get a peek at the name through the soggy baggie. Not one to take such an obvious cue to give him space, I went for it, using my own shivering to launch into the air. Quick as he was, he underestimated my determination. The baggie was in my hands before my feet touched the floor. Being short and swift was a fine offense against tall and slow.
“Hey!” he barked.
“It says Baird. It’s a last name.” I ducked when he reach around my shoulders, thwarting his effort to retrieve the baggy. “But I can’t read the first name. No knowing if it is a guy or gal.”
“Give it back.” Brent refused to continue reaching for the prize, as if little ol’ Olivia outplaying him was a front to his ego.
“I don’t know a Baird,” I said.
“Neither do I. This means I can’t just look the Reaper up and distract him or her like I had planned.”
“So I was right?” I dropped my arms to my sides as we faced each other, Brent looking as bewildered and broken as I felt.
“Seems so.”
I sighed to keep from breaking into tears. My shoulders and head felt heavy. The couch seemed a great place to throw myself down and let my emotions pour out. I would’ve found out, if Brent did rush at me and grab the baggie. There was only a small glimpse of his wicked smile before we found ourselves entangled, both vying for the prize. A moment after, I found out what it would be like to collapse onto the couch, only with the Eidolon, too, falling over top of me. The springs of the IKEA beast cringed from our weight.
Thoughts of Eve and the name Baird flitted away in exchange for one very real thing hovering above me.
I grew tense but hopeful when his eyes turned to my lips. I knew what that meant. Every woman did. However selfish and grossly out of place it was, I was okay with one kiss, more curious than frightened to discover what it is like to kiss an Eidolon who could drain my life. Perhaps my motivation was to ridicule Fate by kissing the lips of Death himself. Or maybe I was cold, tired, and downright horny.

UFI welcomes Author Nina Croft. Thanks for Joining us!!

Immortality – which type would you choose?

Hi, I’m Nina Croft and I write romance, all sorts of romance, but often mixed with science fiction or paranormal or both. My latest release, BLOOD AND METAL, is book 5 in my Dark Desires series. When I started the series, I intended it to be pure space opera (I’d just finished watching Joss Whedon’s firefly at the time), but then the pilot of my space ship turned up flashing a pair of fangs. What could I do?

Actually, the more I thought about the idea of vampires in space, the more I liked it. After all, if vampires exist now (which of course they do) and they are immortal (which everyone knows they are), why shouldn’t they exist in the future? So Ricardo Sanchez, space pirate and vampire, was allowed to stay.

The series follows the adventures, romantic and otherwise, of the crew of the spaceship, the Blood Hunter. Rico is the hero of Break Out, book 1 in the series, and in book 5, Blood and Metal, we have another vampire. Daisy, the heroine, is the co-pilot of the Blood Hunter. She’s a plant/human hybrid and now a newly turned vampire (Rico had to change her to save her life, in book 4) struggling to come to terms with the darkness and the blood-hunger.

One of the many things which fascinates me about vampires is their immortality, and this fits very well into the overall theme of the Dark Desires series, which looks at man’s fear of death, and his search for ever lasting life. The truth is, I don’t want to die (ask me again in a few thousand years and I might change my mind), and I’m sure many people feel the same.

But you don’t have to go the vampire route. In my vision of the future, there are other sorts of immortality available. The series is set in a time where Earth is no longer habitable, and man has fled to the stars. There they have discovered Meridian, a substance with the power to bestow immortality. Meridian is extremely rare and only available to a select few, and a new class has evolved—the Collective—super-rich and immortal, they rule the universe. Unfortunately, there are a few side effects which only become apparent with time.

And then there’s Fergal, the hero of Blood and Metal. Fergal knows he’s never going to be able to afford the Meridian treatment and so he got himself inducted into a super-secret and highly-illegal cybernetics program which promises immortality. But it’s experimental and there are a few glitches along the way…

And finally, there’s the Church. While not everyone can afford Meridian, everyone wants to live forever, and religious beliefs have gained a new popularity. The Church of Everlasting Life offers a cheaper, if less reliable, alternative to immortality with its promise of an afterlife in paradise.
So which type of immortality would you choose? Meridian, expensive but reliable; the bite of a vampire, not always successful, but if it works, you’re set for life—or rather death; Cybernetics; very new and risky; or eternal paradise Church-style—al l you need is a little faith.
Or would you rather just die?
__________________________________ 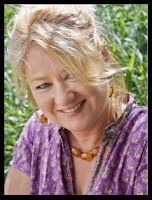 Nina Croft grew up in the north of England. After training as an accountant, she spent four years working as a volunteer in Zambia, which left her with a love of the sun and a dislike of nine-to-five work. She then spent a number of years mixing travel (whenever possible) with work (whenever necessary) but has now settled down to a life of writing and picking almonds on a remote farm in the mountains of southern Spain.

Nina writes all types of romance, often mixed with elements of the paranormal and science fiction. 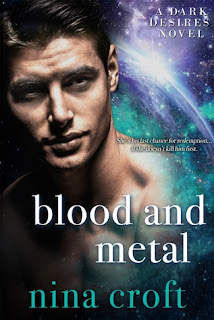 
She's his last chance for redemption...if she doesn't kill him first.

Copilot of the Blood Hunter, Daisy is a newly-turned vampire, and she's hungry. Really hungry and it's interfering with her plans for revenge. Unfortunately, the only thing that can distract her from said hunger is sex...which is a problem when she can barely refrain from draining any man dry within moments. But old flame Fergal Cain might just be the sexy-assed solution to her problem.

Part human, part cyborg, and with a poison coursing through his system, Fergal's running out of time to find the scientist who has the cure. Unfortunately for him, the misfit crew of the Blood Hunter put a serious kink in his plans. And if the poison doesn't kill him, the hot little vamp he can't resist might do the honors herself...