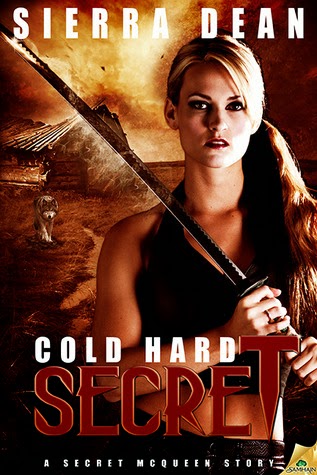 
The Secret’s out, and heads will roll.

Ever since her near-death experience at the hands of the villainous Dr. Kesteral, Secret McQueen hasn’t been the same. As in damaged almost beyond repair. But as usual, Secret has no time to lick her wounds.

Armed to the fangs, she and Desmond embark on a whirlwind quest for revenge that takes them to the sewers of Paris to put an end to Alexandre Peyton. Instead, it’s almost the end of them, and before she can stop him, Peyton rips the veil off her deepest secret.

The devil’s not through muddling up the details, either. An eye-opening confab with Sig in the Big Apple leaves her wondering if she’s ever been in control of her own life at all. Plus, a cryptic postcard sends her racing back to her Manitoba hometown, fearing for her grandmere.

With the Council holding the power of life and death over her head, Secret’s circle of friends is shrinking, while the pool of enemies looking for payback is widening like a pool of her own blood.

Warning: Contains the least romantic Paris getaway in history and an unstoppable hybrid with an impossible choice to make between two men who’ve been to hell and back for her


COLD HARD SECRET has a TON of action in it. It starts with action and ends with action. There is constant moving with no time for rest. Enemies die, a lot is revealed including who exactly Sig is to Secret. It was not the news she wanted to hear.

Secret is still having a hard time with what happened to her in SECRET UNLEASHED. Her relationship with both Desmond and Holden are suffering due to it but they are both very much trying to be there for her. Good news for those that don't care for the Secret tug of war, the love triangle comes to an end. I would like to say I am surprised by Secrets choice but I'm really not. I saw her final choice from the beginning of the series.

We see a lot of our favorite characters in COLD HARD SECRET. The plot was pulled in many different direction but Sierra made the transitions smooth and made it easy for us to fall into each scene. Be prepared, COLD HARD SECRET ends on a huge cliffhanger. In case you didn't know, book 8 A SECRET TO DIE FOR is the last book for this series. I will miss it but I am excited to see how everything will end.