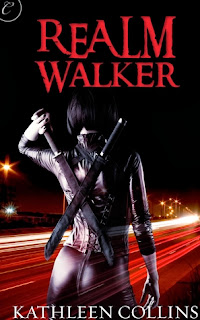 An estranged mate, a mangled body and a powerful demon who calls her by name…

As a realm walker, Juliana is able to see the magical signatures of every other creature but demons. When a demon starts going after her and everyone she cares about she has to work double to try and catch them before she looses everything.

Although I enjoyed REALM WALKER there were a few issues that jump out. The story was slow on the start. I did not connect with the characters or the storyline right away. There was a lot of background and build up throughout the story and when the story actually peaked it felt like there wasn't much left to the book. I sometimes felt like I was missing something. Having said that at least all the background is out-of-the-way for book 2!

Now for the good stuff. There was a ton of action. When things got interesting they stayed interesting. I enjoyed learning about Juliana and her background with Thomas. Juliana's job is interesting and I liked seeing her in action. There really isn't a romance, there is Juliana avoiding and Thomas pursuing but they don't actually meet in the middle until the end (which is part of the build up and end thing I talked about). BUT What we did get of these two and the part of the story that dealt with Michael was entertaining to follow.

REALM WALKER ended with me happy I read it. It has a lot of promise and I want to know what happens now for Thomas and Juliana.