UFI welcomes Author Kali Rose Schmidt. Thanks for Joining us!!

I’m covered in tattoos. Including a tattoo of a man with horns inspired by Stranger Rituals. I love art, and I include tattoos in that.

I also like to spend most of my time outdoors, in the woods.

Reading! Or writing. Even though writing is a job, and I include reading as part of it, it really is the best job in the world. Other than that, hiking through the woods or playing on a beach are some of my favourite things.


What is your favorite part of writing?

Going to another world, exploring it, making friends (and enemies) in it. I also love reading up on history of elements in my books (for example, Elves, etc.).

Yes. I listen to music 100% of the time, mainly metal, and usually Zeal & Ardor. For emotional scenes, I listen to the same song on repeat until I’m done with it (and usually crying, too).

V.E. Schwab and Sarah J. Maas, along with Holly Black, are my top three favourites.


How would you pitch Stranger Rituals to someone who has not heard of it before?

Adult dark fantasy about a blood mage running from a curse to stop a holy war.


Can you tell us a little bit about the world that Stranger Rituals is set in?

It’s very, very dark. There’s a holy war coming up, and people are dying in the streets, in a rather gruesome fashion. Blood magic and elemental magic abound, and there is a lot of occult elements in the world in general.


Do you have a favorite scene in Stranger Rituals?

Yes. When Scarko is in a prison cell, alone, but I won’t say more

Vojtech from Stranger Rituals was my favourite. He’s awful, really, but he doesn’t wish to be, and writing his motives (which show up more in book 2, coming in the fall) and backstory was fun and a little painful.

Scarko was the hardest to write, and being that she is the protagonist, a lot of the book was hard to write. Her backstory is tragic, but she hasn’t become bitter. Instead, she uses dark humor to get through the day-to-day, which in some ways, is even more tragic. 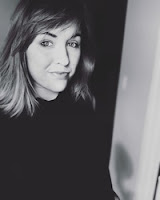 Kali Rose Schmidt is an author, mother, and villain lover. She likes bloody tales of monsters, yoga with the lights off, and anything that goes bump in the night.

Find Kali and her books 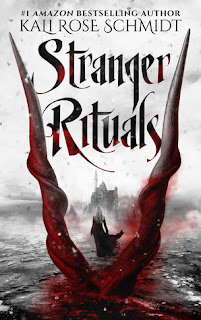 A fighter with a venomous grudge.
A monster with an immortal curse.
A girl with a terrible gift.

All three out for blood in a land torn apart by harsh gods and holy wars. Each entwined with the other, on their own quests for vengeance, and yet held together by strange links to sinister pasts. As their fates unravel, a dangerous romance blooms, and violent darkness beckons.