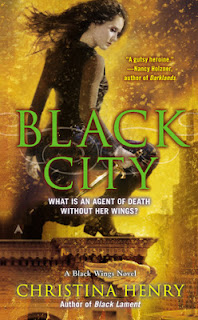 When Maddy finally killed her father, Azazel, she thought his depraved experiment died with him. But now Chicago has been infested with vampires immune to the effects of the sun, and the bloodbath is worse than she could have ever imagined. While the Agency refuses to interfere with other supernatural courts, Maddy is determined to do everything within her power to save her city—wings or no wings.

But when the leader of the vampires requests that she turn herself in or risk more deaths, Maddy becomes a target for the very people she’s trying to save. Left with no other choice, she turns to Lucifer, the one creature who has the power to help her. But her grandfather’s aid has always come at a price…


*Spoiler's may be present*
BLACK CITY is the darkest of all the books so far in the Black Wings Series. Maddy has lost her husband, she’s pregnant, and people are trying to kill her at every turn. With the vampires on the loose in her city people are dying left and right and Maddy jumps right in hoping to save people. A lot happens in BLACK CITY, it's packed full of action, emotion and sticky situations.

Maddy is a bit of a mess. She has taken to putting herself in extremely dangerous situations against other people’s advice. She seems to be turning romantically to someone I really don't want her to be with, but surprisingly is the only one sticking by her side. The emotion in book 5 left me a tad bit depressed to tell you the truth but I could not put the book down. By the end of BLACK CITY all of Maddie's friends have left her. I never thought that would happen and it was a bit of a shock to see them all turn their backs on her. I have no clue how Christina will bring them all back together. If you are a fan of the series you can’t NOT read BLACK CITY. I honestly can't think of anything else to say as I'm a bit shell shocked. Wow yeah that is all go read it.