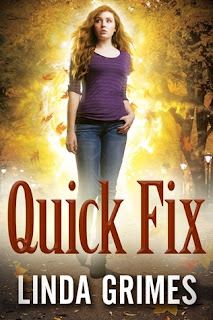 Ciel Halligan, an aura adaptor with a chameleon-like ability to step into the lives of her clients and fix their problems for them — as them — is working a job at the National Zoo with her boyfriend, Billy, and his ten-year-old sister, Molly. It's supposed to be a quick fix, giving her time to decide if it's wise to pursue the romantic relationship her charming scoundrel of a best friend wants, or if she should give Mark, the CIA spook she's crushed on since hormones first rattled her pubescent brain, a chance to step up to the plate.

Molly has already begun to show signs of being an adaptor herself. She's young for it, but she's always been precocious, so it's not impossible. What is impossible is her taking on the form of the baby orangutan she touches — adaptors can only project human auras. Until now, apparently. Worse, Molly is stuck in ape form. She can't change herself back.

Escaping from the zoo with their new baby orang, Ciel and Billy head for NYC and the only person they know can help: Ciel's brother James, a non-adaptor scientist who's determined to crack the aura adaptor genetic code. But when Billy winds up in jail, accused of attempted murder, Ciel begins to suspect Molly's unusual adapting ability is more than just a fluke. Who's been experimenting on Molly, and what do they hope to gain? And will Ciel survive to find out?


The characters in this series are Fun, Fun, Fun. I could not imagine the greatness of being able to transform myself into different people but Linda does a great job of describing it to us. Ciel and Billy are at the zoo with Molly, Billy's sister when she comes into her adapter 'powers' and turns into an orangutan. As they are escaping a worker thinks they are stealing an animal from the zoo and they have to make a fast get away. Until they can find James and get him to change Molly back they have to not only fool their families so they think everything with Molly is alright but they also keep their eye on an orangutan Molly and figure out who is murdering people and framing Billy.

The characters really do make this series. There are a ton of plot twists involved and following the characters is nothing but entertaining. There are some great scenes where we meet more of the family and get to see how they interact with each other in their own element. There are a lot to have to get straight but it was pretty interesting to see them in action.

Lets talk romance. I know you are waiting for that. After IN A FIX I was really rooting for Billy and Ciel and they do not disappoint in QUICK FIX. We get some great sexual tension, some yummy sexy scenes as well as some jealous encounters. What more could you ask for. Family reaction is awesome too, especially the scene at the end with their Moms.

If you are looking for a bit of a change this series is the one for you. Its light and unique with a great pace and plenty of action to keep you on your toes.