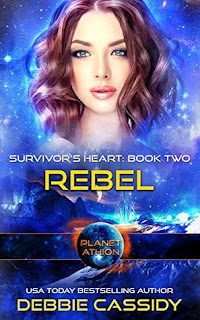 When death stalks the night, the only way to survive is to become the hunter...
Things aren’t what they seem with the guys. But when lies threaten to pull us apart, fate decides to test us...
Stranded on a strange planet on unfamiliar terrain, there’s no choice but to work together. No choice but to trust in one another. No choice but to give in to passion!
But we’re not alone, because something lurks in the dark. Something ancient and hungry...
The lights are about to go out...
Don’t make a sound...

A Sci fi adventure with a Why Choose Romance and part of the Planet Athion world.

I enjoyed REBEL a bit more than ROGUE. In Rogue, I felt like I was missing something as I had not read anything in the Planet Athion world and I felt like we could have used more information. REBEL felt like it was part of it's own world.

The characters are all interesting so far. They all have their issues and struggles which make them more likable to me. The harem gets some traction in REBEL. It seems this harem is moving along faster than some of Debbie's other series, so if you like a little bit of a faster burn you are in luck.

The books in the Survivor's Heart series are very short and move at a fast pace. Things happen quickly with not a whole lot of build up or detail. I didn't feel the lack of detail as much in REBEL which was nice, but I still feel like we would benefit from just a little bit more. I'm still enjoying the storyline and I will continue to read this series.