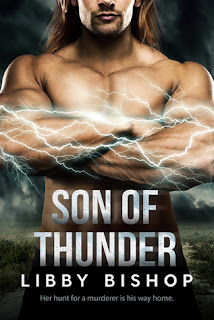 
Rune is the grandson of Thor, and just as strong. Exiled to the realm of Earth for nearly killing his brother–it was a little misunderstanding– he has to find a way to redeem himself so he can get back to Asgard. And when he lands—literally—in the bed of a fiery redhead with an FBI badge, he realizes that she may be the key to going home. But helping Liv hunt a killer has one big consequence—chemistry. He can’t keep his hands off her, and there’s no way they can ever be together.

Six years ago, FBI Special Agent Liv Winter’s best friend was murdered. Since then, she’s taken a two-week vacation around the anniversary of the death to try and solve the case. She’s used every available resource. Yet, her friend’s killer is still on the loose. She refuses to give up—willing to do almost anything to bring the person to justice.

Apparently, almost anything includes trusting a god. And while she might need Rune’s help with her case, there’s no way she’ll ever trust him with her heart.


Six years later, Liv is still searching for her best friends murderer. Rune has been exiled from Asgard and he needs to redeem himself to find his way back. Together they make a deal to accomplish their goals only to find out their goals are intertwined and soon, so are their hearts. SON OF THUNDER was a great read with an interesting world and a spicy romance.


The attraction between Liv and Rune is instant. They make their attraction to each other known and even act on their attraction right away, but the actual relationship grows nicely from beginning to end. There wasn't an instant, all consuming love which was nice. There is also a really interesting storyline to follow in SON OF THUNDER besides the romance. There is some investigating and danger as well as some action and suspense thrown in along the journey of Liv and Rune falling in love.

Everything but a really small scene takes place on earth, but there is still mythology involved and talked about in SON OF THUNDER. Humans are also aware of the gods and its completely normal to see one walking around among them.

I'm not sure if there will be more books to follow, but I wouldn't mind reading more of Rune and Liv or even follow a new couple.