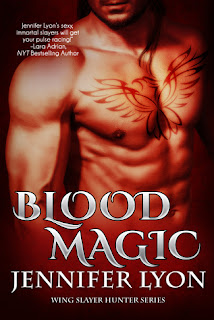 Axel Locke is the sinfully sexy leader of the Wing Slayer Hunters–a group of supernatural witch hunters who have vowed to never give into the curse driving them to slaughter innocent witches. But when his little sister is death-cursed by a demon witch, Axel will stop at nothing to save her. He rescues a beautiful witch from a killer, intending to force her to magically cure his sister. The only problem? She has no idea what she is.

Darcy McAllister grew up knowing she was different, but she never imagined she’s a witch. With the life of a child at stake, she agrees to work with the hot, compelling hunter to gain control over her newfound powers. But an irresistible attraction crackles between them, creating a dangerous dilemma—can Darcy trust the man hexed to crave her blood to satisfy her aching desire?

Will their forbidden love destroy them?

As Darcy and Axel race against the clock, their explosive passion deepens to a fiery love. But when Darcy attempts to heal his sister makes her a target for a demon’s revenge, Axel will sacrifice anything, including his immortal soul, to save her.

With a great cast of characters and an interesting storyline, BLOOD MAGIC was a fast paced read that was easy to enjoy from front to back.

Darcy has always felt different and the night she's attacked she finds out why. She has a really hard time believing that she is a witch, but she can't deny it for long. She doesn't appreciate being kidnapped, but she wants to help Axel's little sister and she also wants to learn what she can really do. I thought she was a pretty strong individual considering what she was going through. She didn't sit in the corner and cry, she did what she needed to do.

It took me a bit to get a good feel for Axel. I could FEEL his struggle with his curse and the pull he had to Darcy. He wants her to save his sister, but I really felt that he wanted to be saved too and he just didn't know it. He has a really hard time trusting his feelings as well as Darcy since she is a witch, but he does pursue his feelings for her and when they are together, they make a really good team.

I truly enjoyed reading BLOOD MAGIC and thought that the introduction to the world and characters of the Wing Slayer series was well executed. I really liked getting to know both the main characters as well as the secondary characters. You could tell that they were all going to be important to the series and I definitely have a few that I want to read more about. I look forward to reading book two!

* This book was provided free of charge from NetGalley in exchange for an honest review.
Posted by StacyUFI at 3:00 AM 4 comments: