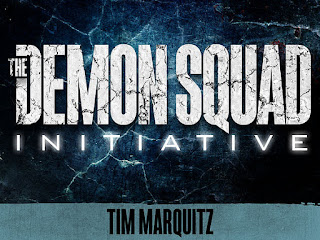 UFI welcomes Author Tim Marquitz. Thanks for Joining us!!

Tim has a Kickstarter campaign going to fund the tenth book in the Demon Squad series! You can check it out by following the link below.
https://www.kickstarter.com/projects/1862998032/the-demon-squad-initiative?ref=nav_search

TM: That I don’t eat babies for breakfast. No, I’m kidding. I totally do. Beyond that, I think I’m pretty open and the core of who I am has been dissected quite a bit over the years. I’m an open book. One who apparently likes bad puns.

TM: There’s really not much down time in my life. Between the work I do for Ragnarok Publications, the outside editing with Dominion Editorial, and my writing and family obligations I’m more often than not working. That said, I do make sure to squeeze in time to watch mixed martial arts events (UFC and whatnot) but even then I’m multi-tasking, doing social media stuff or editing. The goal is to eventually hit a point where I can have a more defined schedule and enjoy some off time but I haven’t made it there yet.

TM: While I enjoy all the aspects of putting a story together I think the best part is once I’ve done all the prep work (outline, concept, direction) and can sit down and just let my mind run amok and write. There’s so much that goes into writing that the actual writing gets overshadowed. Fortunately, I’m not one of those authors that feels the need to craft every sentence as if it were their last so when I sit down to write I kind of fall into a trance and just go to town. When I’m there, in the zone so to speak, that’s the part I love the most. I get to create without worrying about anything more than crafting compelling visuals.

TM: I always outline my stories, which is really the only thing I really have to do. If I don’t I feel like I’m floundering and I find it hard to move forward with the writing. I just don’t feel grounded or prepared otherwise. Beyond that though, no, there’s really no other ritual I feel obligated to adhere to. As long as I have outlined my story and I know what each chapter is supposed to be then I’m good to go.

TM: I’m a HUGE Jim Butcher fan. The Dresden Files were a revelation to me at the start of my writing career and largely defined how I went about creating the Demon Squad series. Jim’s voice spoke to me and really helped me find my own.

How would you pitch Demon Squad to someone who has not heard of it before?

TM: I would pitch the Demon Squad as the funnest urban fantasy series you’ve never heard of. The first of the series came out just a couple months after Kadrey’s Sandman Slim hit the shelves back in 2009 and it was around long before Hearne and many of my contemporaries out there that you have heard of. The series is off the wall and fun and action-packed and a little crude at times, but it’s original and offers as much in the way of laughs as it does action.

Can you tell us a little bit about the world that The Demon Squad series is set in?

TM: Absolutely. The world of the Demon Squad is predicated on the idea that God and the Devil have left humanity behind and the supernatural world is left in chaos. In the wake of their disappearance a lot of things that were hidden away are creeping into the light, revelations that probably should have been left in the darkness. As the series progresses it becomes apparent that there is more to our world than just Earth, that dimensions exist just outside of reach and that all we’ve been taught about God and creation of existence might not have been the complete truth. And, of course, all of this is seen through the eyes of the main character, Frank, who just happens to be related to the Devil.

Do you have a favorite scene in Institutionalized?

TM: Despite having only just begun the novel I actually do have a favorite scene. I can’t go into the details but suffice it to say that Frank has a snark-filed run in with his father and Daddy offers up some true to form wisdom in a way that only Lucifer can. It’s a dark scene that reminds Frank, despite all his growth and burgeoning power, that he’s still just a kid in the grand scheme of things.

TM: My favorite character is definitely Frank from the Demon Squad. He’s so similar to me in a lot of ways, his voice and nature, that it flows so easily. I’ll start in on a DS book and before I know it I’ve written six to seven thousand words without breaking a sweat. The character is just so fun, his perspective so warped and amusing that I can’t help but enjoy putting his thoughts to paper.

On the opposite side of that is frank’s angelic cousin Scarlett. She’s a tortured soul, adrift emotionally after being abandoned by God she’s torn and conflicted. She’s the polar opposite of Frank and her voice doesn’t flow as naturally for me as Frank’s does, for obvious reasons. She’s polite, usually, and her head is in the clouds, her naivety at odds with her intelligence and will to do the right thing. She makes for difficult writing.

TM: I’ve several new Demon Squad books coming out after the completion of the current Kickstarter campaign, The Demon Squad Initiative. The main one is DS-10 Institutionalized, but there’s also an offshoot novel featuring characters from the DS universe and a full length novel featuring Frank’s cousin, Scarlett.

On top of that, I’ve my comedic zombie novel ZILF to finish as well as a monster/survival book I’ve been invited to write. This year will also see the release of Humanity 2.0 (Emergence) the first in a shared world superhero franchise coming out from Ragnarok Publications.

Tim Marquitz is the author of the Demon Squad series, the Blood War Trilogy, co-author of the Dead West series, as well as several standalone books, and numerous anthology appearances including Triumph Over Tragedy, Corrupts Absolutely?, That Hoodoo Voodoo that You Do, Widowmakers, At Hell’s Gates 1&3, Neverland's Library, Blackguards, SNAFU Survival of the Fittest, Future Warfare, and Hunters (Cohesion Press), In the Shadow of the Towers (Night Shade), and Unbound (Grim Oak Press). Tim also collaborated on Memoirs of a MACHINE, the story of MMA pioneer John Machine Lober.

Tim is co-owner and Editor in Chief of Ragnarok Publications.