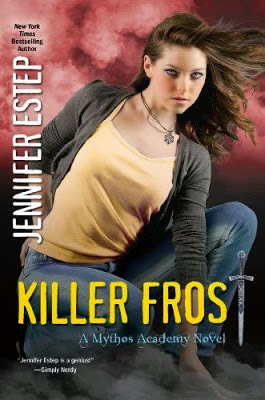 
I’ve battled the Reapers of Chaos before–and survived. But this time I have a Bad, Bad Feeling it’s going to be a fight to the death … most likely mine.

Yeah, I’ve got my psychometry magic, my talking sword, Vic–and even the most dangerous Spartan on campus at my side, in Logan freaking Quinn, but I’m no match for Loki, the evil Norse god of chaos. I may be Nike’s Champion, but at heart, I’m still just Gwen Frost, that weird Gypsy girl everyone at school loves to gossip about.

Then someone I love is put in more danger than ever before, and something inside me snaps. This time, Loki and his Reapers are going down for good … or I am.


KILLER FROST is the last book in the Mythos Academy series. All of Gwen's allies are present to help defeat the Reapers and Loki for good. As Nike's Champion it's said that Gwen will be the one to defeat Loki but she still has no clue how and doubts she is any match for him.

It was great seeing all the world and character development we have witnessed since FIRST FROST come to a head in the final book. There were plenty of shocks that will throw you through a loop. I don't want to spoil anything and I have said a lot about the series in previous book reviews but know that the pace was great and the final battle did the series justice. It wasn't too short, too easy or without its failures. Everyone was involved, no one was left unscathed and when it was time for Gwen to step up she did so even though she knew the sacrifice to herself would be great.

It was fun getting to know Gwen and her friends and I will miss the series but the conclusion was satisfying.


* This book was provided free of charge from NetGalley in exchange for an honest review.
Posted by StacyUFI at 3:00 AM 1 comment: