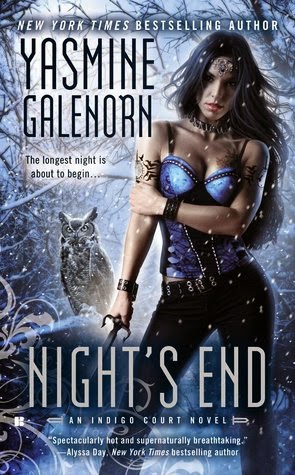 
Eons ago, vampires tried to turn the dark Fae in order to harness their magic, only to create a demonic enemy more powerful than they could have imagined. Now, in a final push, Myst returns with a vengeance to bring the Golden Wood forever under the rule of the Indigo Court.

Newly crowned Fae Queens Cicely and Rhiannon have embraced their destinies and claimed their thrones. But Myst is rising once more, and now, at the helm of her armies, she begins her final assault on the Golden Wood. As Fae, vampires, and magic-born alike fall under the tide of blood, Cicely and her friends must discover a way to destroy the spidery queen before they—and their people—face total annihilation.


Cicely has gone through a lot in a very short time. Her life was turned upside down when she came back to New Forest and now that she is a Fae Queen she has to not only protect herself but her court as well from Myst who once again is ready to attack the Golden Wood. I have always felt that Cicely was a very strong character. The slow reveal of information about her past and what she was meant for when she was born was intriguing and I was never bored with it. Her relationship with her cousin Rhiannon has remained strong and I have enjoyed watching them fight for their friends and family while growing closer.

Although this is Urban Fantasy there is some romance to be had in the Indigo Court series. Cicely and Grieve have a long history as soul mates and this lifetime together they are finally able to be with one another after a long struggle. I have always been a bit disappointed that Lannan was brought into their story. I'm not really into the sharing of Cicely so it never felt right and I wasn't really satisfied with how things turned out in that department.

The events of NIGHT'S END happened at a nice pace with plenty of action and lots of danger. I felt like the series was over by the end and all loose ends were tied up to my liking. We got a tiny glimpse of the characters future at the end of NIGHT'S END which was nice, I wouldn't mind another little short story diving a bit more into it as I am always interested in what happens after the fact but overall I was happy with the conclusion to the Indigo Courts series.

Tales of the Hidden World by Simon R. Green

Not a very big week for releases. Happy Reading anyways!
Posted by StacyUFI at 2:30 AM No comments: