Backcountry Magic
People sometimes ask me why I use the backcountry as a setting for some of my paranormal stories. It’s easy enough to answer. I’ve spent thousands of days with a pack on my back. No, that’s not an exaggeration. I’ve climbed all over the world, though never any of the eight thousand meter peaks in the Himalaya.
I’ve had more than a few, um, unusual experiences far from other people, and often far from any sort of maintained trail. One common event is hearing someone behind me. Of course when I turn around, there’s no one there. Sometimes, if I listen carefully, whoever’s not there actually talks with me. It’s how I’ve come up with some of my more interesting story ideas.
Another thing that happens far from civilization is sort of a sixth sense. I have something—who knows, maybe it’s a guardian angel—that keeps me safe. It tells me if a snow slope is unstable or a route unsafe. I’ve learned to listen to it. Backcountry survival is a blend of luck and skill. One or the other by itself often isn’t enough.
In the modern world, it’s a treat to get away from electronics and instant availability, sort of a retreat to our roots as more primitive people. What better place to find romance? He’s not texting. He’s putting up the tent. She’s not yammering with her girlfriends, she’s mixing up freeze-dried glop for dinner. You have to rely on each other and pay attention to one another, too. I’ve seen more than one couple who couldn’t get along in the backcountry. Their relationships never lasted long in the front country, either. You learn to work together as a team and to appreciate one another’s strengths. If you can’t do that, you don’t go on many more trips together.
At least in my life, out of the way places have been a crucible to strengthen my marriage. We’ve returned from many an adventure more strongly bonded as a couple than before. And when you get right down to it, romance is looking at your partner with love shining from your eyes. Sure they have faults. We all do. But you turn a blind eye to them. It’s a glass half full phenomenon. We pick what we want to see.
There’s a reason so many people read romance. It’s a metaphor for what we want in our lives. We all want our HEA with the one person who makes us feel loved and special. Want to find out if your relationship will go the distance? Go backpacking together. Travel to a third world country. Face adversity greater than, “Aw crap, we’re out of milk.” If you can work together rather than blaming one another for why something isn’t working, I’d say you picked a winner.
Any stories you’d like to share? When did you know your current love was Mr. or Ms. Right? What tipped you off?
__________________________________

Ann Gimpel is a national bestselling author. A lifelong aficionado of the unusual, she began writing speculative fiction a few years ago. Since then her short fiction has appeared in a number of webzines and anthologies. Her longer books run the gamut from urban fantasy to paranormal romance. Once upon a time, she nurtured clients, now she nurtures dark, gritty fantasy stories that push hard against reality. When she’s not writing, she’s in the backcountry getting down and dirty with her camera. She’s published over 30 books to date, with several more planned for 2015 and beyond. A husband, grown children, grandchildren and three wolf hybrids round out her family. 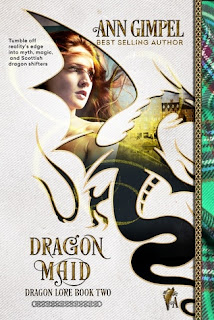 
When pressed, Jonathan Shea admits magic runs through his blood, but he’s always been ambivalent about it—until a dragon and her mage show up in the Scottish Highlands, and then all bets are off. Jonathan’s charmed and captivated by the dragon—a creature fresh out of myth and legend—but the woman bonded to the dragon is so enticing, he tosses caution to the winds and dives into the magical power he’s avoided for so long.

Britta and her dragon prepare for a battle to save Earth. Freshly transplanted from a much earlier time, she feels awkward, out of place. The first person she lays eyes on is Jonathan. There’s something about him. She can’t quite pinpoint it, but he has way more magic than he lets on. Magic aside, it runs deeper than that. For the first time ever, she questions the wisdom of remaining a maid. If she doesn’t make up her mind damned fast, though, her choices will fritter away. Beset from every side, she’s never needed her magical ability more.

Surrounded by dragon shifters, Celtic gods, Selkies, time travel, and a heaping portion of magic, Jonathan comes into his own fast. Fell creatures target him, Britta, and her dragon. In the midst of chaos, he and Britta find scorching passion and love so heartbreakingly tender, it will change their lives forever. 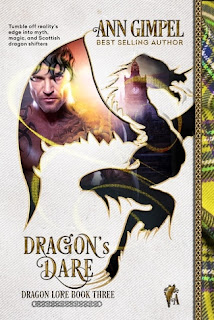 Bloated on chaos, the Morrigan leaves the Scottish Highlands to gather power. A trip through Hell yields quite the assortment of allies tagging along behind her. Fell creatures straight out of myth and nightmare that haven’t darkened Earth’s boundaries for centuries heed her call.

Heartily sick of the Morrigan’s maneuvering, the dragons are close to shutting their world off from everywhere, Earth included. If they do, every dragon shifter bond will be broken. Horrified, Lachlan and Britta launch a desperate campaign to hang onto their dragons.
Magic may bite back, but if the dragons take their magic ball and go home, Earth will fade, along with all other worlds. That suits the Morrigan fine. War and anarchy are her favorite companions, and she collects misery like children gather beloved toys.

Arianrhod’s fellow Celts found out about her fall from grace and her half-Druid son, Jonathan. With nothing further to hide, she goes back in time hunting Angus, Jonathan’s father. Forty years apart was a steep price to pay. The world needs Angus’s magic. And Jonathan needs all the help he can get. Late to accept the power thrumming through him, he holds a key role in keeping the world from spinning off its axis. Reluctant at first, Jonathan finally gets it.

Anything less and everyone he loves will pay an unthinkable price.