Who's ready for the AllSoulsCon?

AllSoulsCon, a fan-run one-day convention celebrating THE ALL SOULS TRILOGY, will take place September 12th in Los Angeles. The best part is that this great Con is available to fans all over the world via livestream!

Both Deborah and audiobook reader Jennifer Ikeda will be in attendance, and it’s going to be an outstanding opportunity to meet them and fellow fans, enjoy AST-inspired food, wine, contests, and a lot more! You can check out the schedule here or look below for a few highlights:


Are you excited about the possibilities? Here is some more great news! 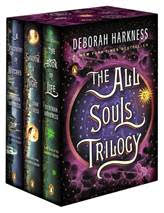 ABOUT THE ALL SOULS TRILOGY
THE ALL SOULS TRILOGY follows the journey of Diana Bishop, a young scholar and a descendant of witches, who discovers a long-lost and enchanted alchemical manuscript, Ashmole 782, deep in Oxford's Bodleian Library. Its reappearance summons a fantastical underworld, which she navigates with her leading man, vampire geneticist Matthew Clairmont. In no time, Diana and Matthew are plunged into a world of spies, magic, and danger, and as the search for Ashmole 782 deepens and Diana seeks out a witch to tutor her in magic, the net of Matthew’s past tightens around them, and they embark on a very different—and vastly more dangerous—journey.  Themes of power and forbidden passion, family and caring, past deeds and their present consequences drive this intelligent, romantic and transporting saga, praised by People as “wonderfully imaginative grown-up fantasy with all the magic of Harry Potter or Twilight.”

ABOUT DEBORAH HARKNESS
Deborah Harkness is the number one New York Times bestselling author of A Discovery of Witches, Shadow of Night, and The Book of Life. A history professor at the University of Southern California, Harkness has received Fulbright, Guggenheim, and National Humanities Center fellowships. Her publications include works on the history of science, magic, and alchemy.  Her most recent scholarly book is The Jewel House: Elizabethan London and the Scientific Revolution.  She lives in Los Angeles.
__________________________________

Want to try your luck?
Penguin and AllSoulsCon is offering up a virtual ticket for one of UFI's lucky fans, which means that one of YOU will be able to attend the Con from anywhere via computer.