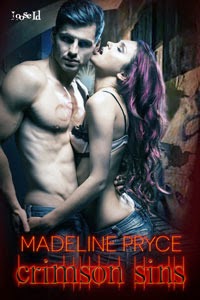 
Created in Darkness and born of Death, three brothers carry a deadly secret.

One lethal enough to have the dead outnumber the living. Necromancer. Biohazard. Zombie. The abomination inside Bastian Hale demanded constant payment—fresh blood. Without it, he’d rot from the inside out and become little more than a mindless monster. Some called him a living vampire, others considered him contaminated. One woman would call him hers.

Morgan Cross never understood the innate necromancer power running through her veins or why ghosts and zombies sought to ruin her life. When someone’s deadly obsession throws her into Bastian’s arms, their pasts come back to haunt them and she must avoid the one thing she was born to do—claim him as hers.


CRIMSON SINS is the first book in a new series by author Madeline Pryce. While the blurb has a warning in it regarding some content, I did not find it any worse than any other slightly dark paranormal romance.

Morgan was a bit depressing in the beginning. She had a crappy job which she immediately lost, a stalker that is leaving her body parts that happen to be reanimated and she lives in a dump of a building. She knows she's different but doesn't know why and when her stalker finally makes himself known she is saved on the brink of death by the cop she has been helping solve cases anonymously for. Bastien doesn't do relationships but Morgan draws him in immediately. Unfortunately his father is after her for his own and she is a bit stubborn when it comes to letting him take care of her. I enjoyed learning about the characters pasts, watching them navigate their relationships and defeat their mutual foe.

Lots of emotions, plenty of action, a fast pace and great characters made CRIMSON SINS a 5 star read for me. If by the end you feel drained yet yearn for more you know you've read a great book. My biggest complaint? IT ENDED! I really wanted more after CRIMSON SINS was over. If I picket with a sign that says "Bring me more!" do you think the author would write more in this world with these characters ASAP? Hopefully we won't have to wait for another book.