Interview: Take A Chance On Me by Mia Epsilon

Growing up, our family had a giant St. Bernard dog named Hero. He appointed himself my special protector and followed me around everywhere I went. he even slept under my window at night, as if he were saying, "Climb in here and deal with me first". I decided then and there all my Heroes would also be protectors.

When I get a bit, I love to watch old black and white movies from the Hollywood Glam period. Or read. I absolutely adore reading.

Hearing my characters' voices and their stories told in their way. It's always satisfying to me, as a writer to have a close relationship with those I'm writing about. Or else how can I properly tell their stories?

When I'm straight up writing the first draft or revising, I need some sort of 'white noise': the radio, a soundtrack, even the tv. When I edit, it needs to be almost silent or I can't concentrate and often get distracted.

Decadent Kane and her elves have me in stitches most of the time and her pirate Captain Joren has me in knots any time I see him. Torie James' New Camelot series is incredible and I love the way she created a new world based on a very old myth. JD Robb's In Death books are my favorite futuristic series.

How would you pitch ('Weddings by C & C') to someone who has not heard of it before?

Christine Howell and her two children are the primary focus. Christine marries her soul mate Charlie and together they open a destination wedding planning business in Hawaii called 'Weddings by C & C'. Each book in the series follows one of their wedding couples and their sometimes rocky roads to the altar.

Can you tell us a little bit about the world that ('Weddings by C & C') is set in?

Many of the books will have Hawaii as a wedding setting yet take place in the couples' home locations. For Christine's daughter Anna, that's mid North Carolina, USA, as it is for Christine's son Adam. For Charlie sister Ally, it's entirely in Hawaii. For Ally's friend Kirsten, there's several locations, from Hawaii to Wyoming to England.

Do you have a favorite scene in ('Take a Chance on Me')?

My favorite, one of them, is when Christine is bent on the floor trying to remove some floor nails and Charlie walks in on her singing very loudly to the radio.

My favorite is probably Christine, because there's so much of me in her, and her in me. We're the same age, at the same point in our lives, with grown children and our own lives about to start once again.

The hardest is the villain, because it's difficult for me to comprehend the motives of deliberately setting out to frame and hurt other people.

I have books 3, 'That Night' and book 4, 'When You Believe' in the Weddings by C & C series releasing later this year from Breathless Press. I hope to have books 5, 6 and 7 released next year. We'll see how the characters cooperate.

This or That
Character
CHARLIE JERGENS
Angels or Demons: Angels, since my Christine is one ☺
Vampires or Shifters : Neither, *laughs*
Left or Right: I'm a lefty
Up or Down: How about both, in an intimate situation?
Pizza or Pasta : Hmmm, tough decision. Pasta with marinara sauce
Coffee or Tea: Coffee any day or night of the week. I leave the tea for the Brits.
Coke or Pepsi : Pepsi
YA or Adult : Definitely Adult
Knives or Guns: Neither, though I wouldn't hesitate to protect Mine with a gun.
Reading or Writing: Reading
Facebook or Twitter: Face book. Twitter doesn't give near enough space.

Mia Epsilon lives with her enduring soul mate hubby in the gorgeous Blue Ridge Appalachian Mountains of North Carolina, USA. She's an avid reader of almost anything but particularly romance, with too many favorite authors to name. Mia is a never-miss-an-episode viewer of Doctor Who and Sherlock, eagerly waits each new season, and tends to binge watch both on Netflix with a couple of pots of tea and a plate of blueberry scones. She also happily suffers a coffee and chocolate addiction which causes her to visit her favorite chocolate store, The Chocolate Fetish often.

She can most often be found at her computer, spinning new tales, or in a quiet padded nook with her e reader happily engrossed in a new story. Look for more books and favorite characters in the Weddings by C & C line including, That Night featuring more of Anna & Robin, and If You Want Me, Adam and Emily's story 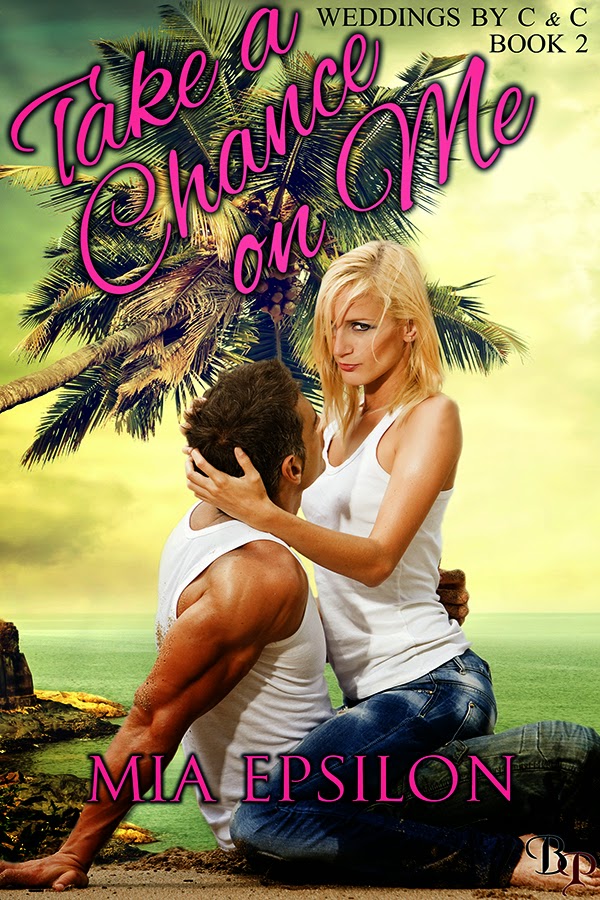 After a near fatal accident leads to one incredible night of amazing sex, Christine and Charlie take the leap from friends to lovers.

Christine has battled many demons in the last few years. Charlie has always been her confident and support. When Charlie refuses to answer emails or texts after an embezzling scheme arises at work, Christine must come to terms with not only losing a fabulous lover and her best friend but her job as well.

Charlie carries his own scars when it comes to women. Yet there's something about Christine which brings out his protective side and makes him hope for love he's wanted for years.

Christine and Charlie must work together to catch the thief before they can secure a love of a lifetime. Can they catch the embezzler before they lose not only their jobs and each other, but their lives as well?

"I wish I could go with you. I could show you such delights."

She hesitated, unsure as always if Charlie meant an innuendo or just conversation. He was a world class flirt, a charmer like none she'd ever encountered, and Christine never felt quite steady around him. For six years he'd seen her as a coworker, then a buddy, then as a good, close friend but not as anything more. Damn it all. "Oh, I bet. You're a world class traveler and adventurer after all. When did you last visit Australia?"

"Eight years ago. You will love it." Charlie leaned back in his chair, the window behind him showing the rolling waves of the ocean. "There's nothing like the Sydney quay and the Nations Row houses in Canberra. I'd love to see your face when you see them."

She sighed. So much for a romantic vacation with him. He meant friendly conversation. It was all for the best really. They'd both seen how rumors regarding coworkers being more than coworkers affected the professional atmosphere. "This has been a dream of mine, especially with Maddy begging me for ages to visit."

"I understand." Of course he did. She'd mentioned the trip several times. Charlie even helped her make the flight arrangements to finally visit her best friend. "No one deserves it more. The last three years have been horrible for you."

"I do need this vacation." So why did it feel so empty to be going alone?

"Don't forget to have fun." He winked. "I could give you some ideas on fun."

Geez, he had to be aware how his wink affected women. Every female in ten miles went all fluttery in the knees. Did he have to use it on her? "Stop flirting with me. You don't need practice. It comes as natural to you as breathing."

"Who says I'm flirting? Your plane flies right over Honolulu. Stop by and see me in person. We could have dinner, see the sunset, and play on the beach. I'll drool over you in a bikini while you feast your gaze on me in a Speedo."

She laughed even as the idea almost took root. Charlie in a Speedo, wet, glistening in the sun with nothing but a few scraps of tiny material between them. Oh heck no. "Like I'm ever going to put a bikini on in front of you? You've had chances to stop here on the east coast and see me. Yet you didn't."

He lost the smile and the teasing light in his face faded. "I did when you needed me most."

She swallowed, wishing she could take back the thoughtless words. "I remember. So much I've forgotten or blocked, but I recall your face and voice. You held me and made me feel safe. Why haven't you visited since?"

"Because I'm obviously a fool." Charlie tapped his long fingers together against his chin.
She felt her gaze widen. He couldn't be serious. But damn, he seemed so intense, leaning forward, navy gaze all but drilling into her. She swallowed again. Maddy always told her to be bold. She could push a bit, flirt back then lick her rejection wounds during the fifteen hour flight to the other side of the world. "I always have your favorite brand of scotch on hand."

She shrugged, crossed her legs, and tried to appear nonchalant. Maddy would be proud. "Your favorite scotch, favorite foods, nice cleans sheets on the bed, and a jogging trail all waiting for you here."