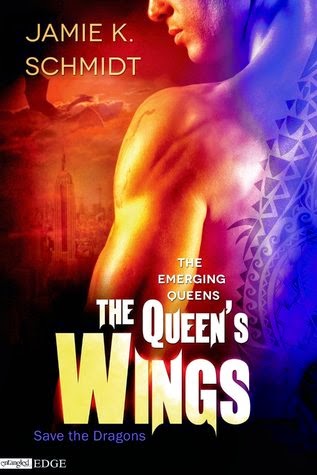 
Long ago, the Cult of Humanity sacrificed the Dragon Queen, crippling the breeding process. But now Carolyn hears the voice of that long dead queen telling her that she holds the key to breaking the spell that will free all the female dragons.

FBI dragon Reed's disdain for humans can't mask the magnetic attraction he has for Carolyn, but when she tells him she's going to shift into a dragon he thinks she's crazy. A female hasn't been hatched, or shape shifted, in over a thousand years.

He's proven wrong after Carolyn shifts and is named the new Queen on the block. A never-ending line of suitors forms, but she only wants Reed. Too bad he doesn't want in on the competition. But when the Cult kidnaps Carolyn to sacrifice her in an effort to make the curse against the female dragons permanent, Reed must face his fears—and feelings, racing to save the woman he realizes he can't live without.


Carolyn is positive that she is turning into a dragon but no one will take her seriously. I loved her determination and devotion to her own cause. With so little female dragons in the world they are treated as broodmares and she is adamant that will not happen to her. Reed is your typical alpha male and it was not love at first site for me when it came to him. He is standoffish and a bit cruel to Carolyn. Pushes her away, pulls her close, kisses someone else in front of her. I really didn't care for him for most of the book. You never know where he stands or his motives. He seemed to redeem himself by the end but at that point I still didn't love him.

There were some moments in the plot that annoyed me. It would be going along smoothly and then develop a hiccup and become a tad slow. I enjoyed the world of the Emerging Queens Series. With the ending I can tell things will change dramatically from the world that was developed in THE QUEEN'S WINGS. The supporting characters were entertaining, I had my favorites and I hope they will be in book 2.

With a great amount of action and mystery, THE QUEEN'S WINGS was a nice start to this new paranormal romance series. I look forward to more.

Souls of the Damned (Kat Redding #5) by E.S. Moore