UFI welcomes Mary Abshire Author of The Quest. Thanks for Joining us!!

The majority of the time, I create a title for my books before I sit down to write them. On other occasions, I discover the title while I'm writing. Book titles are not difficult to come up with. But a series name can be.

From day one when I started The Awakening, the title was set. The book was easy to name since the protagonist is discovering who and what she is in a world full of supernatural creatures. That's right, who. She's found a dump and she has no memories. Two investigators, one human and one vampire, find her among a mass of dead bodies. They decide to help her and they want to know who murdered so many people and why. They soon learn she doesn't have memories and she's not like any creature. More questions rise, such as: How did she get to be what she is? Who created her? Who took her memories? Why? And the list goes on.

The Awakening is her finding these answers. It's mystery, action, violence, suspense, and everything you like with urban fantasy with supernatural creatures.

But I don't give all the answers in the book. That's right. I had a second one in my head, so I purposely left some questions unanswered. I also had the title ready to go.

The Quest is her journey to get justice for the people murdered and everything taken from her. She knows her name and what she is, but she still doesn't have her memories. The same cast return along with some new ones. As usual, her goal is not an easy one. Especially when the person she's after has put a bounty out for her. Again, I bring mystery, action, violence, and suspense into my urban fantasy world.

The two titles were easy for me to create. But during the editing process, I was asked for a series name. Uh-oh. For once, I couldn't think of the best name for the series. I spent over day trying to think of one. Then, I was in the shower when the title came to me. It fit perfectly…Project Eve. How did I come up with the series title? If you read The Quest, you will discover the answer.

Author Bio:
Mary lives in Indiana and is a lifetime lover of the paranormal, sci-fi, and fantasy. When she's not slaving away at her government job, she is a Paranormal Romance and Urban Fantasy Author. She creates fantastical worlds with vampires, demons, werewolves, and other supernatural creatures. Dive into her books and find action, a dash of mystery, and seductive men with passionate hearts. The Project Eve series is an urban fantasy 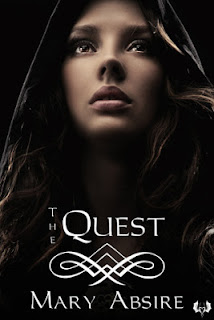 Retribution. At any cost.

Now that she knows her name and what she is, she wants justice for everything she's lost. Though her memories elude her, she takes a job for a half-demon Senator and, aided by werewolves from a local clan, intends to uncover evidence that will convict the Senator of more than thirty murders.

Getting to the Senator and finding the necessary evidence is more difficult than she anticipates, especially when there is a bounty for her death. If that were not enough, the vampire who stole her memories returns and reveals unexpected truths. But she's not going to let anything stop her. Not a sadistic assassin or a servant of Lucifer. Not even her ex-lover, the vampire god of the Underworld. Nothing will stop her from claiming retribution...even if the price is her life.